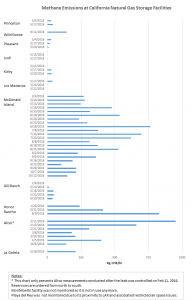 SACRAMENTO, Calif. October 22, 2016 – The Aliso Canyon natural gas leak emitted 109,000 metric tons of methane into the atmosphere from late October 2015 to mid-February 2016, according to the final estimate released by the California Air Resources Board (CARB) staff.  This is roughly equivalent to the annual natural gas usage of 190,000 Los Angeles homes, or the carbon dioxide emissions released from burning over 1 billion gallons of gasoline.

The final estimate will be used to determine the amount of methane reductions needed to fully mitigate the climate impacts of the natural gas leak. Southern California Gas Co. (SoCalGas), which operates the Aliso Canyon natural gas storage facility, is expected to mitigate those impacts by funding projects that reduce methane emissions by an equivalent amount.

“This was the largest methane leak in the history of the state and CARB is determined to ensure that the environmental damage caused by this potent greenhouse gas is fully addressed and mitigated by the Southern California Gas Company,” said CARB Chair Mary D. Nichols.

After the leak was discovered on Oct. 23, 2015, seven state agencies worked together to stop the leak, protect public health and safety, ensure accountability, and strengthen long-term oversight.  The well was permanently sealed in February 2016. Several investigations and analyses of the well failure are underway, including by the state Division of Oil, Gas, and Geothermal Resources and the California Public Utilities Commission.  These agencies will determine whether violations of state regulations occurred, and their findings will be made public.  In February, the state put in place a host of new regulations to strengthen state oversight of oil and gas storage in California, including multiple testing, inspection and monitoring requirements for all wells in the state. 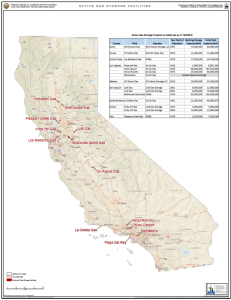 As part of the state’s response, CARB quantified the leak’s methane emissions so that the climate impacts can be fully mitigated. Its report, “Determination of Total Methane Emissions from the Aliso Canyon Natural Gas Leak Incident,” used information gathered from several aircraft flights coordinated by CARB and the California Energy Commission that measured methane levels through the gas plume during the leak, as well as readings from the Aliso Canyon reservoir pressure gauges, to arrive at the final estimate.

The incident was also closely monitored by a variety of scientific research and measurement instruments, including a high-altitude U2 aircraft, two satellites, the state methane monitoring network, and the Megacities Carbon Project monitoring network in Los Angeles. CARB and the South Coast Air Quality Management District (SCAQMD) also supplied ground monitoring from the surrounding community.

CARB staff estimated a range of emissions from the leak. The final estimate of 109,000 metric tons of methane reflects the upper end of that range to ensure full and complete mitigation.

The final estimate also shows that the leak was responsible for approximately 20 percent of the total statewide methane emissions during the 16 weeks it remained uncontrolled. That is more than double the statewide fugitive emissions from the state’s oil and gas production during the same period, and roughly half of the emissions from the state’s industrial dairies, the largest source of methane emissions in California, during that period.  Methane constitutes about 9 percent of California’s total greenhouse gas emissions each year.

The Aliso Canyon facility is the largest underground natural gas storage facility on the West Coast. It is located at the northern edge of the San Fernando Valley in Los Angeles, and has enough capacity to provide natural gas for roughly 2 million households for a year.

As ordered by Governor Edmund G. Brown Jr. in his Emergency Declaration on January 6, 2016, CARB has developed a plan to fully mitigate the fugitive emissions from Aliso Canyon. California also filed suit against SoCalGas on February 2 seeking both penalties and mitigation stemming from the leak. That action is currently pending before the court.  Determination of the final estimate is an important step in establishing the mitigation projects SoCalGas will develop according to the requirements set out in the plan. SoCalGas has indicated that it is committed to mitigating the climate effects of the leak.

CARB and the California Energy Commission are also releasing data from the state’s first ever aerial survey of underground natural gas storage facilities. The survey is a preliminary look at fugitive emissions from the 11 underground storage facilities currently in use around the state. It shows significant reductions in these emissions from the Aliso Canyon Facility, and minor or declining emissions at most other facilities. The survey is the result of flights over these sites by Scientific Aviation.

The final determination of Aliso Canyon emissions and the methodology for the determination can be found here:  https://www.arb.ca.gov/research/aliso_canyon_natural_gas_leak.htm

Information about the California Public Utilities Commission’s investigation into the cause of the leak can be found here: http://www.cpuc.ca.gov/aliso/