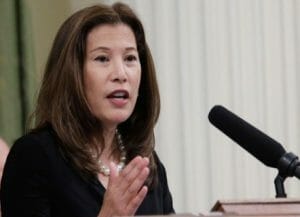 The award honors an organization, court, program, or individual who has promoted, inspired, improved, or led an innovation or accomplishment in the field of civics education related to the justice system.

Chief Justice Cantil-Sakauye was selected for her long-time commitment to civics education and for her strategic but personal approach to the issue. “She doesn’t just bring good ideas, she delivers the nuts and bolts,” said a member of the nominating committee. “Her contributions are extensive and have made real impact.”

Chief Justice Cantil-Sakauye has a more than 20-year history of bringing education about the judicial branch to California students. When she was named chief justice in 2011, she chose to make civic education a priority and a legacy issue, said California Administrative Director Martin Hoshino in a nomination letter.

“The Chief Justice faced a major challenge embarking on this path: there was little civic education in California K-12 schools, and no statewide plan to address the subject with the six million students in nearly 1,000 school districts,” Hoshino said. Her first action was to reach out to the superintendent of Public Instruction to co-sponsor a Civic Learning Award to recognize schools already engaged in civics education, and to identify replicable models.

She then convened a statewide Civics Summit in 2013, inviting leaders from education, business, law and the community to examine the status of civics in California. This platform provided the foundation to establish the Task Force on K-12 Learning for California, which released a report in 2014 that was unanimously endorsed by teachers’ unions, administrators’ associations, business and labor. This report influenced the state education policy as the state updated its Curriculum Framework to include a new emphasis on civic education.

In 2017, the chief justice called a second summit to review progress and identify next steps. Out of that summit emerged the Civic Learning Partnership, a pilot program of six courts across the state, co-led by judicial officers. Together they developed a toolkit to share with other counties. To date, Civic Learning Partnerships have been established in 14 counties where local school boards have passed resolutions endorsing civic learning for more than 500,000 students. Listen to Chief Justice Cantil-Sakauye talk about the positive impact civics education can have on students and the community. www.youtube.com/watch?v=DUCZLtzy1nQ#action=share

This is the ninth year NCSC has presented the O’Connor Award, named for retired U.S. Supreme Court Justice Sandra Day O’Connor in honor of her commitment to improving civics education. After retiring from the bench in 2006, Justice O’Connor became a tireless advocate of civics education, working to increase awareness and understanding of how our government works. She established iCivics, a program that uses Web-based educational tools to teach civics education and to inspire students to be active participants in society.

The National Center for State Courts, headquartered in Williamsburg, Va., is a nonprofit court organization dedicated to improving the administration of justice by providing leadership and service to the state courts. Founded in 1971 by the Conference of Chief Justices and Chief Justice of the United States Warren E. Burger, NCSC provides education, training, technology, management, and research services to the nation’s state courts.