“We’re nearing the longest economic recovery in modern history, and as Isaac Newton observed: What goes up must come down,” said Governor Brown. “This is a time to save for our future, not to make pricey promises we can’t keep. I said it before and I’ll say it again: Let’s not blow it now.”

As California’s economy has recovered from the Great Recession, the state has continued to invest in its core priorities, including: increasing K-12 education funding to record levels; raising the minimum wage; expanding health care coverage to millions more Californians; improving transportation and water systems; and paying down debts.

Significant details of the revised budget include:

Counteracting the Effects of Poverty

Since 2012, California has committed approximately $21 billion in new annual funding to maintain a strong safety net for those with the greatest needs. The May Revision builds on this commitment by expanding the state’s Earned Income Tax Credit program to workers between the ages of 18-25 and above 64, and adjusts income limits to reflect the minimum wage increase to $12 per hour in 2019. The budget also continues to provide billions of dollars to pay for: the expansion of health care coverage; the restoration of low-income health benefits eliminated during the recession; the repeal of the maximum family grant rule in CalWORKs; and increases in child care and early education provider rates and the number of children served.

In 2014, voters created a Rainy Day Fund to save money when the economy is strong for uncertain times ahead. The May Revision maintains the January budget commitment to fully fill the fund. By the end of the current fiscal year, this fund will have a total balance of $9.4 billion growing to $13.8 billion by the end of 2018-19. Additionally, to further protect against the next economic downturn, the budget proposes to direct an extra $3.2 billion into the state’s traditional budget reserve fund.

Combating Homelessness and Investing in Infrastructure

California anticipates $8 billion in higher revenues through 2018-19 compared to the January budget projection. As a result, the state will keep its existing commitments to increase funding for Medi-Cal, Cal Grants, child care, In-Home Supportive Services and foster care reform, among other programs, while focusing the majority of the remaining funding on one-time expenditures in three areas:

To help address the state’s housing shortage, the May Revision also proposes to place the $2 billion “No Place Like Home” bond on the November ballot, which would expand housing opportunities for Californians with mental illness.

The May Revision also refines the state’s California Online College plan and the new funding formula for community colleges.

The May Revision proposes $96 million, which includes additional auction proceeds and other funds, to implement the Forest Carbon Plan and take other actions to protect California’s forests against the increasing threat of disastrous wildfires. This $96 million comes in addition to $160 million proposed in January’s cap-and-trade expenditure plan to support forest improvements and fire protection.

Additional details about the Governor’s May Revision can be found at www.ebudget.ca.gov. 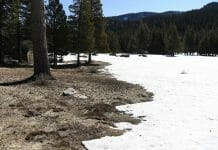