Facebook
Twitter
Pinterest
WhatsApp
SACRAMENTO, CA November 6, 2019 – California Secretary of State Alex Padilla released the latest statewide report of voter registration, showing that 80.65 percent of eligible Californians are registered to vote—the highest percentage since June 1952. As of October 1, 2019, there were 20,328,636 Californians registered as of this report.
Click here to view the complete statewide Report of Registration.
“California is a shining example of the power of building a more inclusive democracy,” Secretary of State Alex Padilla said. “With the highest percentage of eligible Californians registered to vote in more than 67 years, we are seeing the success of our policies and outreach initiatives to facilitate eligible Californians to register to vote.”
Californians can prepare for the 2020 Elections by confirming that their registration—including political party—is up to date at VoterStatus.sos.ca.gov. California citizens who need to update their voter registration or register for the first time can do so at RegisterToVote.ca.gov.
Comparison to 2016 Presidential Election Cycle
This report of registration reflects data as of 154 days before the March 3, 2020 Presidential Primary Election.
80.65 percent of eligible Californians were registered to vote, a more than 10-point increase compared to the same point in the 2016 Presidential Primary Election cycle (70.20 percent on January 5, 2016).
The top five counties with the largest increase in voter registration by percentage since the January 5, 2016, Report are San Bernardino, San Benito, Tulare, Imperial, and Riverside.
There are 3,069,223 more registered voters than there were at the same point in the 2016 cycle.
No Party Preference Voters Still Second Largest Block in California
There are 5,435,431 Californians registered with No Party Preference This is the second largest group of voters behind voters registered with the Democratic Party. The Republican Party is the third largest group of registered voters.
California’s qualified political parties choose whether they will allow No Party Preference voters to participate in their presidential primary elections. For the March 3, 2020 Presidential Primary Election, Californians who are registered to vote with No Party Preference may request an American Independent Party, Democratic Party, or Libertarian Party ballot. This is a process known as ‘crossover voting.’ For more information on this process, read our October 21, 2019 press release.
Voters registered with a political party can only vote for that party’s presidential candidates in a primary election. These voters must re-register to vote if they wish to vote in another party’s presidential primary election.
The Report of Registration includes:
Registration Comparison Between Presidential Primary 154 Day Reports
(October 1, 2019 Report vs. January 5, 2016 Report) 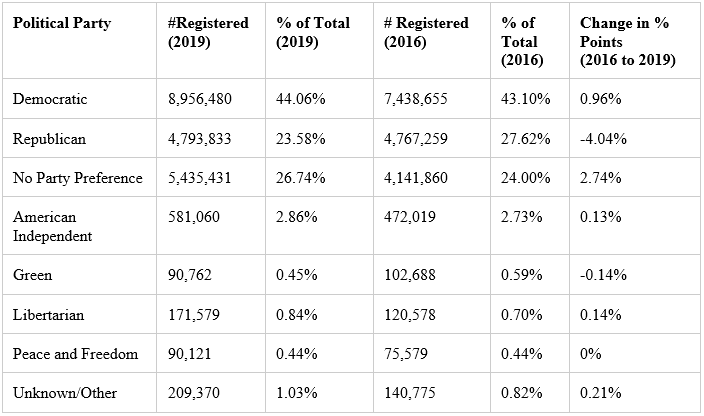