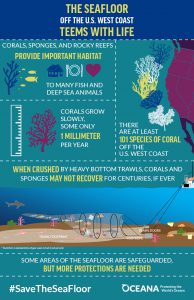 September 7, 2017 – Today, Oceana released the findings of a scientific expedition it conducted in some never before explored waters off Southern California. In August 2016, in partnership with the Channel Islands National Marine Sanctuary and Marine Applied Research and Exploration, Oceana documented the living seafloor off Southern California along with species that rely upon healthy coral gardens, sponge beds, and rocky reefs for habitat, breeding, feeding, nurseries, and survival. Oceana urges federal fishery managers to safeguard these unique and special places from destructive bottom trawl fishing.

“Our expedition findings further confirm that the living seafloor off Southern California warrants wide-spread protections from future, expanded bottom trawling—the most damaging fishing practice to the deep-sea,” said Geoff Shester, California campaign director and senior scientist with Oceana. “These waters are unparalleled off the West Coast in their diversity and are extremely important to recovering and sustaining commercial and recreational fish populations off Southern California. Given how much of the seafloor is still unexplored, more new discoveries are on the horizon.”

Using high definition cameras housed inside a Remotely Operated Vehicle (ROV), the expedition documented many exciting finds that will help inform and advance the long-term conservation and management of these fragile, deep-sea habitats. The expedition:

The Pacific Fishery Management Council (Council) and National Marine Fisheries Service, which are responsible for managing fisheries in federal waters off the U.S. West Coast, are currently reviewing important habitat protections in this area off Southern California as well as other ocean waters along the West Coast. This November in Orange County, the Council will decide the future of the living seafloor, including more than 16,000 square miles of seafloor habitat off the coast there that Oceana proposed for protection from bottom trawling. Nearshore bottom trawling off Southern California for California halibut, sea cucumber, and prawns would remain unaffected by the proposal.

In August 2016, Oceana, in coordination with Marine Applied Research and Exploration and Channel Islands National Marine Sanctuary, conducted a five-day research expedition in Pacific Ocean waters off Southern California. The expedition surveyed several locations which Oceana proposes the Council protect from bottom trawl fishing. Bottom trawlers drag heavy trawl doors and footropes along the ocean floor to capture fish that live on and around the seafloor. In doing so, the gear can crush and topple delicate living habitats, like corals and sponges, some of which grow only millimeters per year.

The full expedition findings can be downloaded here

A short summary of the expedition findings can be obtained here

Oceana is the largest international advocacy organization dedicated solely to ocean conservation. Oceana is rebuilding abundant and biodiverse oceans by winning science-based policies in countries that control one third of the world’s wild fish catch. With nearly 200 victories that stop overfishing, habitat destruction, pollution and killing of threatened species like turtles and sharks, Oceana’s campaigns are delivering results. A restored ocean means that one billion people can enjoy a healthy seafood meal, every day, forever. Together, we can save the oceans and help feed the world. To learn more about Oceana’s work in the United States, please visit www.usa.oceana.org