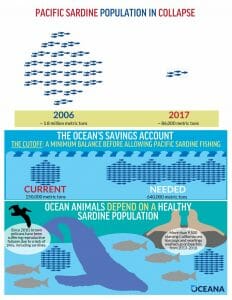 Monterey, CA, March 26, 2019—A new draft stock assessment released by the National Marine Fisheries Service projects the population of Pacific sardine to be 27,547 metric tons (mt) in July 2019. According to federal law, this population level is well below the 50,000 mt threshold under which the Fisheries Service must declare sardines “overfished.” The assessment, which still must undergo review and adoption by the Pacific Fishery Management Council’s Scientific and Statistical Committee, currently shows the Pacific sardine population has collapsed 98.5 percent since 2006.

Because the sardine assessment indicates the population is drastically below the 150,000 mt necessary for commercial fishing to occur, not only should the commercial fishery remain closed for a fifth consecutive year, but additional repercussions may mean new limits on the live bait fishery as well as more restrictive limits on incidental catch of sardines in other fisheries.

Pacific sardine range from British Columbia, Canada to Baja California, Mexico and are a critically important forage (food) fish for sea lions, dolphins, large whales and brown pelicans, in addition to recreationally and commercially important fish like marlins and tunas.

“We’ve been urging for an overhaul to the way sardine are managed for the last seven years,” said Shester. “It is critical to hold fishery managers accountable for exacerbating this modern-day sardine collapse and seek management changes to use best available science to learn from our mistakes.”

After science review, the sardine assessment is scheduled for final adoption by the Pacific Fishery Management Council on April 12 at its meeting in Rohnert Park, California, where the Council will also be voting on regulations for the July 2019- June 2020 commercial fishing year.

The federal Coastal Pelagic Species Fisheries Management Plan establishes a minimum population of 50,000 mt, below which the population is considered overfished. Once overfished, the Fisheries Service must implement a rebuilding plan to recover the population to healthy levels. When sardines are again at healthy levels, Oceana supports the resumption of an ecologically sustainable commercial fishery. However, major overhauls are needed to the Fishery Management Plan to ensure that fishing is curtailed during a population decline to prevent exacerbating a fishery collapse in the future.

For more information about the Pacific sardine collapse and an associated infographic, click here.

Oceana is the largest international advocacy organization dedicated solely to ocean conservation. Oceana is rebuilding abundant and biodiverse oceans by winning science-based policies in countries that control one third of the world’s wild fish catch. With more than 200 victories that stop overfishing, habitat destruction, pollution and killing of threatened species like turtles and sharks, Oceana’s campaigns are delivering results. A restored ocean means that one billion people can enjoy a healthy seafood meal, every day, forever. Together, we can save the oceans and help feed the world. Visit www.oceana.org to learn more.