SACRAMENTO, Aug. 2, 2016 — With water conservation falling to 21.5 percent savings in June 2016—down from 27.5 percent a year ago—the State Water Resources Control Board today announced that it is closely monitoring conservation levels, will scrutinize actions by water suppliers where use has risen dramatically and is carefully reviewing the “stress tests” to ensure that water supply reliability claims are complete and accurate.

“Californians have continued to conserve without top down mandates, but the question is whether we can save enough and keep it up for the long haul,” said State Water Board Chair Felicia Marcus. “While last winter’s rains allowed us to ease state mandated conservation, that didn’t mean the drought was over or that local conservation efforts should stop — and we’re looking carefully at the data to see what’s happening where, and why.” 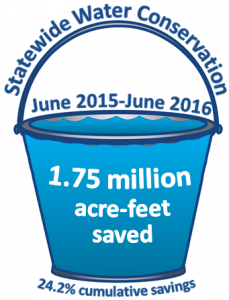 Although new regulations that took effect in June give local water suppliers more autonomy to set their own conservation goals based on local supply conditions, the State Water Board has maintained since mid-2014 that it expects suppliers to continue emphasizing water conservation to their customers as a top priority as California enters the summer months, when the opportunity for water savings is greatest. While local water suppliers may have relaxed water use restrictions that were in place last summer – the statewide prohibitions, from operation of fountains without recirculating pumps, to irrigation of turf in street medians, remain in place.

“Conservation should be the California way of life,” said Marcus.  “Some relaxation of conservation in light of the relief we got last winter and other supply conditions is appropriate and expected; abandonment of conservation is not.  Saving water now extends local water supplies into an uncertain future, and saves money in the long term on the need to develop additional supplies. In particular, the summer months are the time it’s easiest to save by reducing outdoor irrigation to the minimum needed to water trees and shrubs while letting our lawns go the color of the surrounding hillsides.”

Starting in June, the State Water Board’s recently updated emergency water conservation regulations give urban water agencies the ability to set their own conservation standards based on a “stress test” of supply reliability. Water suppliers must demonstrate that they have sufficient supplies to withstand three years of continuous drought or take additional measures that include mandatory conservation targets. The regulation is in effect through January 2017.

The deadline to submit the “stress test” results and three-year resiliency plans was June 22. While most urban water suppliers and wholesale water providers have submitted materials, the State Water Board staff is following up with a number of suppliers whose submissions appear inaccurate, incomplete, or unclear. Once all of the submissions have been received and are complete, the State Water Board will make them publicly available.

While water suppliers may calculate lower conservation targets for purposes of state enforcement, the State Water Board expects that they will continue to promote and achieve water conservation at the local level and enforce prohibitions on wasting water first enacted in July 2014. The Board expectation is that all water suppliers will continue encouraging their customers to conserve, even if they pass their “stress test” and demonstrate that they will have sufficient water after three additional dry years.

Moreover, the Board is prepared to come back in early 2017 to reimpose new mandatory water restrictions if needed.

The recently adopted regulation is part of a wider effort to build on short-term, emergency water restrictions to establish permanent conservation measures that improve long-term drought preparedness and eliminate the worst water-wasting practices. These actions will help achieve a top priority of the state’s Water Action Plan: to “Make Conservation a California Way of Life.”

In May, Governor Edmund G. Brown Jr. issued an executive order calling for new permanent water use efficiency targets for each urban water supplier and for strengthening local Water Shortage Contingency Plans. The local “stress test” data and three-year resiliency plans collected by the State Water Board will serve as a bridge to these actions and inform the development of new water use efficiency targets.

The State Water Board regulation also continues the statewide ban on specific wasteful uses, such as hosing off sidewalks, driveways and other hardscapes; washing cars with hoses not equipped with a shut-off nozzle; and watering lawns in a manner that causes runoff.  Prohibitions also remain against homeowners associations or local governments taking action against homeowners who reduce or stop watering lawns. As directed by the executive order, the State Water Board will be making these prohibitions permanent.

In his April 1, 2015 Executive Order, in light of the worst snowpack in 500 years, Gov. Edmund G. Brown Jr. mandated a 25 percent water use reduction by users of urban water supplies across California. In May 2015, the State Water Board adopted an emergency regulation requiring a 25 percent reduction in overall potable urban water use statewide from June 2015 through February 2016.

On Feb. 2, 2016, based on Gov. Brown’s November 2015 Executive Order, the State Water Board approved an updated and extended emergency regulation. The extended regulation responded to calls for continuing the conservation structure that had spurred such dramatic savings while providing greater consideration of some factors that influence water use: climate, population growth and significant investments in new local, drought-resilient water supplies such as wastewater reuse and desalination.

On May 9, 2016, Governor Edmund G. Brown Jr. issued Executive Order B-37-16, requiring the Board to adjust its emergency water conservation regulation through the end of January 2017 in recognition of improved urban water supply conditions across the state and, separately, take action to make some of the requirements of the regulation permanent. The Board adopted the revised regulation on May 18.   June was the first month under the revised regulation.

Since June 2014, the State Water Board has been tracking water conservation for each of the state’s larger urban water suppliers (those with more than 3,000 connections) on a monthly basis. Compliance with individual water supplier conservation requirements is based on cumulative savings. Cumulative tracking means that conservation savings will be added together from one month to the next and compared to the amount of water used during the same months in 2013.

California has been dealing with the effects of an unprecedented drought. To learn about all the actions the state has taken to manage our water system and cope with the impacts of the drought, visit Drought.CA.Gov. Every Californian should take steps to conserve water. Find out how at SaveOurWater.com. While saving water, it is important to properly water trees.  Find out how at www.saveourwater.com/trees. In addition to many effective local programs, state-funded turf removal and toilet replacement rebates are also available. Information and rebate applications can be found at: www.saveourwaterrebates.com/.