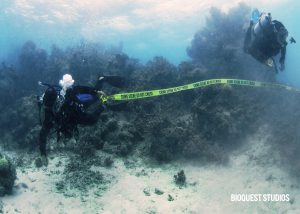 Aug. 17, 2016 – Divers from coastal communities around the world wrapped crime-scene tape around dead coral reefs during a series of underwater dives to highlight the catastrophic damage to this valuable ecosystem and the culpability of the fossil fuel industry for its loss. A series of underwater photographs collected from Samoa, the Australian Great Barrier Reef, and the Andaman Islands have been released today to showcase the impacts of the worst mass coral bleaching in recorded history and how it is one of the consequences of the reckless behavior of Exxon and fossil fuel companies hindering global climate action.

Recent research confirms that the above-average sea temperatures causing this bleaching across 38 countries are the result of human-induced global climate change, rather than from local pollution as was previously argued, and the fossil-fuel industry is the main culprit behind these impacts. Since the past century, companies like Exxon chose to ignore the warnings of their own scientists, and instead have been pouring resources to actively deceive the public by funding climate denial groups, recommending against climate shareholder resolutions, and obstructing climate action.

What were once bright colorful coral reefs full of life have turned bleached white then murky brown as they’ve died and become covered in algae. In places like the Great Barrier Reef up to 50% of previously healthy reef has been bleached and killed. In North America, the National Oceanic and Atmospheric Administration (NOAA) is forecasting that Guam, the Commonwealth of the Northern Mariana Islands, eastern Micronesia and Hainan Island (China) are likely to have the worst bleaching in the coming months, as well as some bleaching going on in Hawaii and various parts of the Caribbean.

The event started in 2014 with bleaching from the western Pacific to Florida. In 2015 the event went fully global but mostly through the impacts of global warming as much of the bleaching occurred before the 2015-16 El Niño developed. Reefs support approximately 25% of all marine species, so a massive coral die-off may risk the livelihoods of 500 million people and goods and services worth $375 billion each year.

“The rapid death of so much coral worldwide this year is a tragedy for the people who depend on these ecosystems. It’s made more hideous by the fact that it could have been prevented, had Exxon and its ilk simply told the truth about climate change when they knew it. It’s not hyperbole to say they killed the reef; it’s just physics and biology,” Bill McKibben, 350.org Senior Advisor and Co Founder.

“The bleaching of the Great Barrier Reef is devastating to my whole community. The Gimuy Walubarra Yidinji have cared for this reef for thousands of years. It is a vital cultural and economic resource, not just for our people, but for all people. I ask that Exxon and AGL and the other fossil fuel companies think very carefully about what they are doing. They talk about denial, they pretend to argue about the science, but what’s really going on is a whole lot of greed. We don’t have time for their excuses now. That greed is driving our planet towards disaster. ” Assoc. Prof Henrietta Marrie, CDU, Gimuy Walubarra Yidinji elder, Cairns, Australia.

“Andaman Islands are frequented by tourists from across the world and their main agenda is to experience the beautiful coral reefs as shown on the internet. As the shallow sites are bleached out, the non-swimmer and first timers who make the major chunk of tourists here, are disappointed. They go back and communicate it to their circles and this leads to reduced diving activity and thus impacting the livelihood of many dive shops who earn money from this activity.” Subhash Chandran, SSI Dive Instructor, Andaman Islands, India.

2015 was the worst year ever experienced for bleaching in Samoa. In Palolo Deep, up to 10% of the reef died as a result of bleaching, while in some parts of Savai’i, 95% of the reef bleached. Normally bleaching occurs up to one or two meters but this year there was bleaching up to twenty, twenty five meters deep – I’ve never seen that happen before. Even some of the less susceptible corals such as the boulder corals were all bleached last year.” Samantha Kwan, Marine Conservation Officer, Samoa Ministry of Natural Resources and Environment.

“After more than two years of coral bleaching, the ongoing global coral bleaching event is still in full swing. 2016 has already brought us bleaching throughout most of the world’s tropics with the Northern Hemisphere bleaching season still warming up. In many places like the northern Great Barrier Reef and islands of the central equatorial Pacific, the bleaching and death of corals has been far worse than ever seen — in many cases in the most remote or best managed reefs. The problem of widespread coral bleaching is a new one, brought about by global warming in the 1980s and continuing to grow stronger and return more frequently. Unless we can get atmospheric CO2 levels back down to those that are healthy for coral reefs, we are going to lose one of the most diverse and valuable ecosystems on earth.” C. Mark Eakin, Ph.D., Coordinator of, NOAA Coral Reef Watch.

“The last 14 consecutive months have been the hottest in recorded history, and to this day, Exxon is still helping to fund an extensive web of climate denial. Exxon’s executives have robbed us of a generation’s worth of action on climate — engaging in the the worst case of potential fraud in history. We will keep spreading the word to hold the fossil fuel industry responsible for their climate crimes.” Aaron Packard, head of 350.org Climate Impacts Program.

“The damage we are seeing on the Great Barrier Reef is heartbreaking. We are witnessing ecocide in process. We have been instructing divers on these reefs for over thirty years,it is our livelihood and it is our home. To see once vibrant, thriving corals lying lifeless, covered in brown algae, and to know that this is caused by the pursuit of the dollar, it’s worse than irresponsible, it’s criminal.”  Jon Burnett, Dive Instructor and Marine Ecologist, Port Douglas, Australia.

For more information on all that #ExxonKnew, visit: exxonknew.org