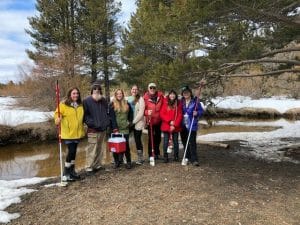 April 10, 2019 – The League to Save Lake Tahoe held its second bi-annual Basin Blitz this spring to assess progress in improving Lake Tahoe’s stormwater infrastructure (pipes, drains and sediment-catching basins). These features flow directly into Lake Tahoe and carry fine sediment pollution from our roads and neighborhoods into the lake, further degrading its clarity.

“Without periodically assessing our stormwater infrastructure, we have no idea how well it is safeguarding Lake Tahoe from pollution,” said Zack Bradford, the natural resource manager for the League to Save Lake Tahoe. “Thanks to the hard work of our citizen-scientist volunteers, we can now quickly take the pulse of these systems and address concerns head on.”

The event was held during a significant period of spring snowmelt from March 25th to April 5th. More than a dozen League-trained citizen-science volunteers sampled stormwater from 23 pipes around Lake Tahoe and collected a total of 47 water samples. Samples were analyzed by the League’s Natural Resources Team for turbidity, a measure of the cloudiness of the water due to fine sediment pollution. 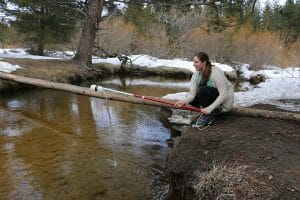 Results of this year’s spring Basin Blitz show that the California Department of Transportation (Caltrans) stormwater infrastructure improvement project at Highway 50 and River Drive (Caltrans installed a Delaware Sand Filter at the site in summer 2018) significantly reduced the amount of fine sediment flowing into the Upper Truckee River and ultimately ending up in Lake Tahoe. Whereas sampling at this site in the past resulted in measurements as high as 4,000 NTU (the center of Lake Tahoe is typically 0.06 NTU), this recent event measured 200 NTU, a significant improvement.

Still, more needs to be done to address areas of high concern around Lake Tahoe if communities and agencies want to restore Lake Tahoe’s clarity to historic levels.

“We hope the results of this year’s Basin Blitz will inspire Lake Tahoe agencies to invest in improving inadequate and aging stormwater infrastructure as Caltrans has done,” said  Darcie Goodman Collins, Ph.D., CEO of the League, adding that, “our data shows that doing so is one way to reduce pollution and Keep Tahoe Blue.”

Nephelometric Turbidity Unit (NTU): A unit of measurement of turbidity. Turbidity measured this way uses an instrument called a turbidimeter with the detector set up to the side of the light beam. Less light reaches the detector if there are lots of small particles scattering the source beam than if there are few.

Delaware Sand Filter: According to Caltrans, this media filter removes fine sediment and particulate pollutants through two concrete-lined vaults. This is done through an initial sedimentation vault and a second filtering vault. Other runoff constituents, such as nutrients, heavy metals, oil and grease, and bacteria and viruses, may also be reduced. Two types of media, sand and pearlite/zeolite, are used. Read more:http://www.dot.ca.gov/hq/env/stormwater/ongoing/pilot_studies/bmps/details/m_filters/index.htm