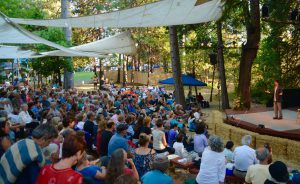 May 16, 2017 – Every summer, for the last 32-years, the Sierra Storytelling Festival has gathered people together from near and far, among the towering pines and sloping lawns of the historic North Columbia Schoolhouse, to hear the nation’s top tellers share the great range of human experience through artfully told stories.

“We are blessed as a community to have an event like the Sierra Storytelling Festival in our area,” says Molly Jochem, Executive Director of the North Columbia Schoolhouse Cultural Center. “The Storytelling committee works hard to create a line-up of diverse world-class tellers whose styles flow organically and keep the audience engaged.”

This year’s lineup features an array of tellers including one who has performed for a president, a popular NPR commentator, a Grammy-nominated artist, a local favorite and more.

Judith Black is one of the nation’s foremost storytellers, creating and telling compelling, humorous, and riveting stories. New perspectives on our national history, tickling familial dysfunction, aging, and human quirks, are all fodder for Black’s tales. She has performed on stages from the Montreal Comedy Festival to The Smithsonian Institution, to the Art Museum of Cape Town, and has appeared an incredible fifteen times at the National Storytelling Festival. And if that wasn’t impressive enough, she is the winner of the Oracle Award, storytelling’s most coveted laurel.

Grammy-nominated and internationally renowned storyteller, Diane Ferlatte, fondly remember her childhood years of sitting on the porch of her grandparents’ home in New Orleans, captivated by the oral stories of family generations past, their spirit, their journeys, and their heartfelt fantasy coming more alive in each moment. She views storytelling as a traditional art form that can promote literacy, imagination, and values in the young. While emphasizing African American stories, she loves to tell stories that hold truths touching upon our common humanity, including personal and historical stories. Ferlatte frequently incorporates music and song into her performances. Erik Pearson, her musical sidekick, often accompanies Diane on banjo & guitar.

As a storyteller and early childhood educator Muriel Johnson has shared traditional folk tales and personal stories with thousands of children and adults across the United States, performing at schools, museums, libraries and festivals. Last spring Muriel was honored to share stories in the townships of South Africa and at the local Story Club in Cape Town. Johnson’s warm gentle presence connects immediately with the audience as she transforms herself into different characters. Her voice, movements, expressions and loving spirit will resonate with anyone listening. This will be Johnson’s third time gracing the Sierra Storytelling Festival stage.

Kevin Kling, best known for his popular commentaries on National Public Radio’s All Things Considered and his storytelling stage shows like Tales from the Charred Underbelly of the Yule Log, delivers hilarious, often tender stories.  Kling’s autobiographical tales are as enchanting as they are true to life: hopping freight trains, getting hit by lightning, performing his banned play in Czechoslovakia, growing up in Minnesota, and eating things before knowing what they are. He appears often at the National Storytelling Festival in Jonesborough, Tennessee and has authored five books published by Borealis Books, The Dog Says How, Holiday Inn, Big Little Brother, Big Little Mother and On Stage with Kevin Kling. His book, Come and Get It, was chosen as the 2012 Minnesota Center for Books Arts “Winter Book”.

Johnny Moses is one of the most popular storytellers in North America. With beauty, wisdom and humor, he shares both traditional and contemporary stories in a wide variety of settings, including festivals, libraries, schools, and private gatherings. Moses’ has shared stories with thousands of people, including audiences at the prestigious National Storytelling Festival, as well as at the Lincoln Center, University of California, University of Washington, Naropa Institute and the New York Open Center. His songs and stories delight all children, whether wide-eyed preschoolers or jaded high school students. As they listen to Moses’ unique and authentic voice, the kids laugh, learn, and are uplifted. And they always ask him to come back again.

With a silly putty voice, hilarious heart-filled stories, and amazing mouth noises (arguably, the greatest whistler in the world) one-person-showman, Andy Offutt Irwin, is equal parts mischievous schoolboy and the Marx Brothers, peppered with a touch of the Southern balladeer. One of the most sought after performing storytellers in the United States, Irwin is especially known for relating the adventures of his eighty-five-year-old-widowed-newly-minted-physician-aunt, Marguerite Van Camp, a woman who avoids curmudgeonship by keeping her finger on the pulse of the changing world around her as she seeks to grow – even at her advanced age – in the New South.

In addition to performances by these tellers, the Sierra Storytelling Festival features several special events including a Storytelling Workshop with Judith Black on Friday afternoon, the hugely popular Story Slam on Saturday afternoon which is open to the public, a Children’s Concert performed by Andy Offutt Erwin Sunday morning, and an Open Telling also on Sunday morning for up-and-coming storytellers. The Festival also hosts Friday and Saturday Gala Evening Concerts with all featured tellers.

“The tellers love performing at the Schoolhouse,” says Jochem. “From the beautiful grounds and historic building to the local food vendors and story slam, the Sierra Storytelling Festival is unlike any other festival.”

Gather your friends and family, pack a picnic and blanket and settle into a weekend where time stands still, magic and wonder fill the air, and the art of story is alive and well.

This year’s festival features local and organic food and drink, beer and wine, for purchase. Attendees should bring a pillow or blanket for provided bench seating or their own low-backed folding chairs, flashlight, and layered clothing as the days are warm and the nights are cool. Pets (except for properly certified dogs) are prohibited. No onsite overnight camping is available.