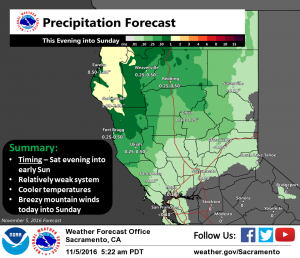 November 5, 2016 – Patchy morning valley fog this morning, otherwise increasing clouds and cooler. A threat of rain Saturday night into Sunday, mainly north of interstate 80. High snow levels above passes. Dry with near normal temperatures through Thursday then cooler with a threat of some precipitation towards the end of next week.

Patches of dense fog this morning has lifted around Sacramento but still persist in some places from around Elk Grove southward. Visibilities will continue to improve this morning but may locally persist til around 11 am. Today will be dry with nice weather ahead of the weak system that will move into the region tonight.

The system will begin to move into the coastal range and northern interior this evening. Precipitation will mainly stay north of I-80. Light amounts are expected south of Shasta County in the valley with a tenth of an inch or less expected. Coastal range south of Shasta County will have half inch or less with similar amounts north of Sierra County for the Sierra Nevada. Snow levels will be high and above 7500 feet for the northern mountains so there are no travel concerns. South of Sacramento some fog may form once again in valley Sunday morning. There will be a chance for some showers on Sunday from around Sacramento northward in the valley but for the most part expect more dry than wet weather to occur in the valley.

Monday and Tuesday will have a ridge build over the area keeping the interior dry with warmer temperatures. Patches of morning fog may once again be an issue both days both in the valley and for mountain valleys.

Wednesday through Friday should remain dry under upper level high pressure ridge over the western U.S. Wednesday high temperatures are forecast to come in slightly above normal with a slow cooling trend through then end of the week as the upper ridge shifts eastward. This shift will be in response to a weak Pacific trough forecast to approach the coast. Timing varies a bit between models but all extended models push a weak front into Norcal either Friday night or Saturday morning. Areas north of about Chico will see a chance of light rain or showers at the end of the week. The combination of clouds and cooler airmass will bring a little cooling with daytime highs a little below normal next Saturday.