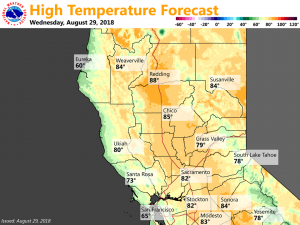 August 29, 2018 – Relatively cool and dry weather expected through this week into early next week. Areas of smoke and haze will continue, especially near wildfires.

A few high clouds are presently arcing across the southern fringe of the forecast area, otherwise clear skies cover the region early this morning. Profiler data indicates the marine layer has deepened above 3k feet which has allowed it to mix out somewhat, so not expecting extensive stratus inland this morning. Current readings range from the mid to upper 40s in the mountain valleys to the upper 50s to upper 60s across the Central Valley. No major changes expected the next couple of days as the weak trough persists.

Modest warming will be possible toward the end of the week with temperatures expected to return to around average. Smoke will persist locally near active fires, but more extensive hazy conditions may return by the weekend.

Dry conditions expected across interior NorCal through the extended period. Guidance continues to struggle with the timing of shortwave disturbances passing through the region, and their subsequent impact on temperature and winds. As such, our forecast relies on a blend of both GFS and ECMWF, with temperatures generally predicted to be around or slightly cooler than normal.