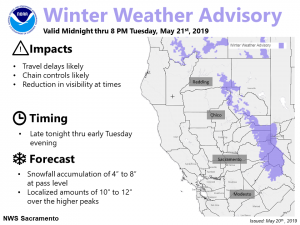 Clear to partly cloudy skies cover the region early this morning as short-wave ridging provides a brief lull in the unsettled weather. Current temperatures are chilly ranging from the mid 20s to mid 30s in the mountains to the mid 40s to lower 50s across the Central Valley.

Next upstream system seen on satellite imagery crossing inside of 140W north of 40N will move southeast today and approach NorCal by later in the afternoon. Increasing instability and surface convergence may lead to a few showers and thunderstorms across the far northern portion of the forecast area late in the day into this evening. 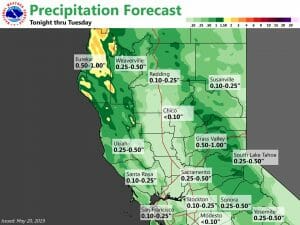 More widespread shower activity will spread across NorCal later tonight and Tuesday as the front surges southward. Showers will continue Tuesday night in the unstable post-frontal airmass. Most of the shower activity on Wednesday and Thursday is expected over the northern Sierra Nevada, but northeasterly flow may allow some showers to drift down into the foothills and eastern edge of the Central Valley.

Another shot of snow is expected for the northern Sierra late tonight through Tuesday, and a winter weather advisory has been posted.

Temperatures will remain well below average early this week, but are expected to moderate somewhat by mid-week.

Unsettled weather looks to continue through much of the extended forecast periods as a series of low pressure systems move through Interior NorCal. Best chances for showers looks to be over the foothills and mountains. Below normal temperatures expected Friday into Monday with high temps upwards of 5 to 10 degrees below normal next weekend.