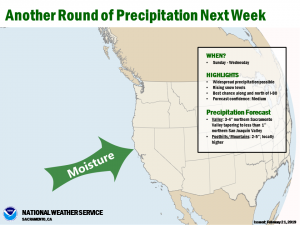 February 22, 2019 – Brisk north winds decrease today. Next chance of precipitation will return over the weekend and continue into next week.

Clear skies cover the region early this morning as clouds are limited to areas east of the Sierra crest. Current temperatures are chilly across most of the region, ranging from the teens and 20s in the mountains to the 30s to around 40 through the Central Valley. Breezy northerly winds continue along the western edge of the Sacramento Valley holding temperatures in the mid 40s. Areas of frost will be likely along the eastern edge of the valley where the north winds have been lighter.

Dry weather will continue today as the region will be under short-wave ridging between systems, the first exiting SoCal and moving into Arizona and Sonora while the next upstream system drops down the British Columbia coast. 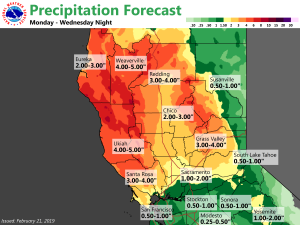 The upstream low is forecast to stall over the PacNW during the weekend as the Omega Block sets up along 140W-150W. Flow breaking under the block will bring light amounts of precipitation to mainly the northern half of the forecast area on Saturday and Sunday. A weak to moderate AR is then forecast to transit NorCal from later Sunday through Monday bringing a better chance of precipitation across the region.

The forecast remains on track this morning, with an active weather pattern continuing to look likely for the extend portion of the forecast. Wet weather starts Monday as a low slides into southern OR and northern CA, tapping into some tropical moisture bringing widespread valley rain and mountain snow to the region. This system will continue to linger over the area through Tuesday; however, models still struggle with how far north or south it will go. The latest data suggests that precip will last into Wednesday, but once again, the ECMWF and the GFS are not in agreement with timing and strength.

Beyond Wednesday, models continue to struggle with the forecast but northern CA may experience a brief period of dry weather on Thursday. For Friday, models are hinting at large low moving into the region which could bring another round of rain and snow.