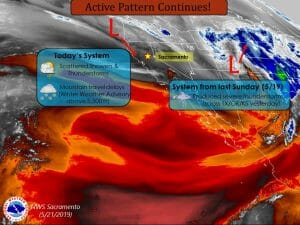 May 21, 2019 – Another weather system will impact northern California today bringing more showers and thunderstorms as well as heavy mountain snow. Below average temperatures continue through the week with additional mountain shower chances. There is the potential for more widespread Memorial Day weekend precipitation.

Early morning water vapor imagery showed a strong mid/upper-level cyclone spinning off the Oregon coast. As was evident with the previous couple of systems, heights and wind fields will again be quite anomalous in nature. More specifically, 500-mb heights should approach 4 standard deviations below average accompanied by rather brisk tropospheric wind fields. One major difference with this disturbance is its more north-northwest to south-southwest track which is not able to tap into appreciable Pacific moisture. Expected Valley rainfall totals will be in the 0.10 to 0.25 inch range with isolated higher pockets in any thunderstorms which may materialize. Moving from north to south across the region, the 03Z SREF plume diagrams shows instability falls off considerably. Consequently, among Valley locations, expect the best chances for thunderstorms across the northern Sacramento Valley where MUCAPE values could approach 500 J/kg. 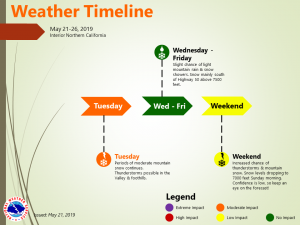 Given mountain precipitation with rather low snow levels for mid/late May, a Winter Weather Advisory remains in effect for the Sierra-Cascade ranges for elevations 5,500 feet and above. Such lower snow levels will lead to travel impacts at mountain pass levels. Currently anticipating a widespread 6 to 12 inches of snow with perhaps up to 18 inches around the ridgetops. The Advisory is set to expire at 8 PM with scattered snow showers possible in the wake through early Wednesday morning.

Today should prove to be the coolest day of the week given the presence of the upper low and extensive cloudiness. Low to mid 60s will be the norm for the Valley along with some breezy southerly winds over the northern Sacramento Valley. Over the mountains, some spots may struggle to escape the low to mid 30s. With the upper low shifting over toward the central to northern Rockies, the flow aloft will become northerly for Wednesday through Friday. Temperatures should gradually warm back into the 70s which is still below average. Mountain showers are forecast to be diurnally forced each day with some activity potentially drifting into the foothills. Looking to early in the weekend, yet another upper low is expected to impact the region with more widespread shower chances.

555 DM upper low forecast to dig south off the CA coast through the weekend, then push inland across SoCal late Sunday or Monday. Models differ with progression of low, however oper GFS and GEFS are similar and preferred. Unsettled weather expected through the extended forecast period with the best chances for showers over the foothills and mountains. Instability charts suggest the potential for mountain thunderstorms on Saturday. Below normal temperatures progged over the weekend into Monday with high temps returning to near normal by Tuesday.