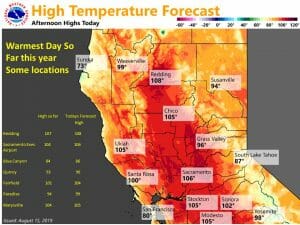 August 15, 2019 – Hot temperatures next couple of days with an excessive heat warning today and Friday valley and foothill locations. Cooler over the weekend with below normal temperatures by Sunday. Warming slowly through next week to a little above normal. Mainly fair skies through the extended period with no precipitation expected interior Northern California.

High pressure over the west coast will bring fair skies and very warm to hot temperatures today. Marine layer is squashed down to below 500 feet and delta breeze is at a minimum so no coastal stratus is expected within the CWA today. 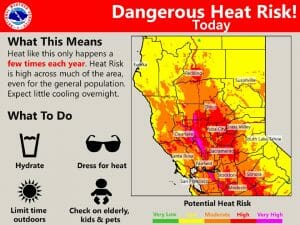 Overall airmass is forecast to be just a bit warmer than on Wednesday so today`s highs should come in just a bit warmer most areas. This will put daytime highs at the highest so far this year at some locations and a excessive heat warning for the lower elevations and foothills will continue.

A weak upper trough will drop into the Pacific Northwest on Friday bringing a slight cooling over NorCal but temperatures will remain well above normal. A slightly stronger upper trough is forecast to develop along or just off the west coast over the weekend. Main effect will be to bring down daytime temperatures to just a little above normal on Saturday to actually a few degrees below normal on Sunday.

No precipitation or even significant cloud cover is expected with this system but marine layer will likely deepen and coastal stratus may redevelop enough that combined with an increased delta flow may make it into the delta and valley during the morning hours.

Ensemble solutions continue to indicate upper ridging over the Desert Southwest gradually expanding westward through the period. Therefore, at or above normal temperatures are anticipated early next week into mid-week. Temperatures will be right around average on Monday, then trend above seasonal normals the rest of the forecast period. Most Valley locations should see temperatures generally in the mid to upper 90s, while highs around 100 are expected over the northern Sacramento Valley.