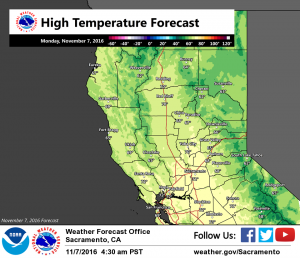 November 7, 2016 – Dry and mild through Thursday, then cooler with a threat of some precipitation towards the end of the week.

Partly to mostly cloudy skies early this morning as mid and upper level moisture continues to stream up from the southwest. There are some thin spots in the clouds which may lead to some patchy morning valley fog, but for the most part there should be enough cloud cover to preclude widespread fog. Temperatures remain mild with readings in the 30s and 40s in the mountains with 50s elsewhere.

Dry and mild weather expected this week as the upper ridge dominates. Patches of morning fog may once again be an issue in the valley and for mountain valleys each morning.

A weak shortwave trough brushes through northern California Friday into early Saturday. The best potential for precipitation is over the Coastal Range and southern Cascades, with some rain into the northern Sacramento Valley. Amounts over the mountains currently projected to be around a tenth to a quarter of an inch. The rest of the area will mainly see some clouds and slightly cooler temperatures. Sunday the ridge begins to redevelop with dry weather and slightly warmer temperatures.