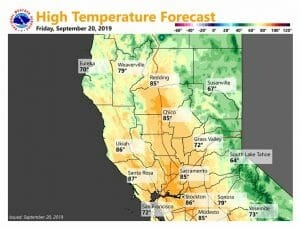 Clear skies cover the region early this morning. Current temperatures are colder in the mountain valleys where readings are in the lower 30s, but a little milder across most of the remainder of interior NorCal where the mildest readings (lower 60s) are across the northern Sacramento Valley. 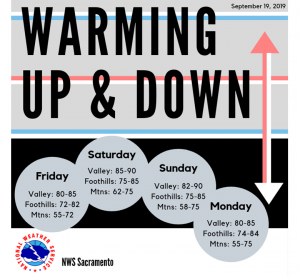 The mid-week trough lifts off to the northeast today as ridging moves into NorCal from the eastern Pacific. Highs today are will be around 5-10 degrees warmer compared to Thursday with another 5 degrees or so of warming expected on Saturday when the warmest valley temperatures will be in the lower 90s. Locally breezy north winds in the Sacramento Valley.

Another open-wave system will pass to the north on Sunday and Sunday night before closing off over the Great Basin. This will bring another chance of showers over the mountains followed by the potential for breezy northerly winds in the Central Valley on Monday.

Pronounced height falls shifting southward into the Desert Southwest on Tuesday will allow offshore ridging to extend back into northern California. While ensembles show a potential for this upper low to linger, it should remain far enough south to not be influential on the forecast.

Tuesday and Wednesday appear to be the warmest days next week given the building heights from the eastern Pacific upper ridge. Nocturnal east-northeasterly flow off the Sierra should keep the typical thermal belts quite mild overnight as lows stay in the upper 60s from Oroville northward.

Ensemble means support a shift in the synoptic pattern by as early as Thursday as broad troughing re-establishes itself over the western U.S. Consequently temperatures will lower by around 10 to 15 degrees with Valley highs possibly remaining in the upper 70s by next Friday (Sep 27).

GEFS ensemble plume diagrams show quite a bit of diversity in the members but trends depict decreasing temperatures as shown in the forecast. Lowering heights should also bring additional cloud cover into the region as well as a chance for mountain showers. Details will change but climate forecasts continue to favor below average temperatures late next week, possibly sticking around until the end of the month.