February 18, 2019 – Dry today and Tuesday with cold morning lows. Minimum temperatures near freezing in the central valley today and Tuesday. A weak, cold system moves through Wednesday and Thursday with light mountain and foothill snow. Dry Friday with more light precipitation possible over the weekend.

Dry northerly flow between high pressure over the eastern Pacific and a trough over the Great Basin bringing fair skies to the CWA this morning. Clearer skies allowing for a little cooler temperatures this morning but breezy north winds keeping morning temperatures a little warmer than anticipated. Gradient from MFR- SAC is about 7 mb at this time and is expected to weaken slightly through the day bringing a little less wind. More sun and a slightly warmer airmass should bring a little warming most areas today. For tonight, northerly surface gradient forecast to be slightly weaker for a little lighter winds. This should allow for a little cooler temperatures in the valley but warmer airmass may offset this cooling a bit. Overall, went for slightly cooler minimums tonight per much of the guidance. Therefore, frost concerns return and may need another frost advisory now that we are entering blooming period for some crops. Should see a little warming on Tuesday as high pressure slides across the region. 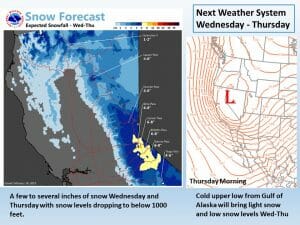 Cold upper trough dropping out of the Gulf of Alaska and through the Pacific Northwest will bring clouds to most of the CWA Tuesday night which should bring up overnight lows a few degrees. Light precipitation from this fairly dry system is forecast to spread southward over the forecast area on Wednesday. Snow levels with this system will start out around 2000 feet then lower to below 1000 feet northern zones on Thursday as the upper low drops southeast of the region and cooler air filters in. The highest elevations of the Sierra may see a half of foot of snow with this system with most areas only seeing an inch or two of snow. Therefore, impacts with this system should be fairly minimal. Skies clear Thursday night as high pressure pushes back over the west coast with another round of breezy north winds.

Upper level ridging builds in on Friday in the wake of a departing cold upper level low. Northerly upper level flow develops, with dry weather across the area. Breezy northerly winds are expected as surface pressure gradient increases. This wind should keep overnight lows from getting as low as they might otherwise for much of the Valley, though the mountains and sheltered areas will be quite cold.

Upper ridge breaks down quickly as yet another cold upper low pressure system drops out of the Gulf of Alaska and moves into the Pacific Northwest Friday night and Saturday. Models continue to differ on just how far south precipitation will reach with the GFS digging precipitation somewhat farther south than ECMWF. Have continued the trend of spreading bring precipitation further south, with the potential for some precipitation across the area for Sunday and Monday. The current track should limit moisture, so snow and rain amounts are not expected to be large. Confidence is still low on this system, though. Snow levels with this system will are currently estimated at around 3000-4000 feet, but this may change as model confidence increases.