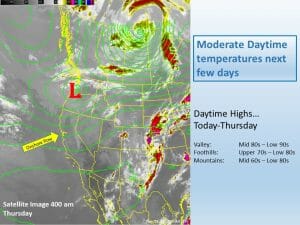 A broad upper trough is forecast to linger over the West Coast for the short term period bringing near normal temperatures and light to moderate onshore flow through Thursday. Overall, precipitation chances appear to be minimal to non-existent. A shortwave trough rotating around the bottom of the trough and through NorCal on Wednesday afternoon is progged by some models to bring very isolated precipitation to parts of the north state. Model solutions are inconsistent however as to whether limited moisture will be enough to produce showers. Have gone with the NBM for now which keeps precipitation out of the CWA. 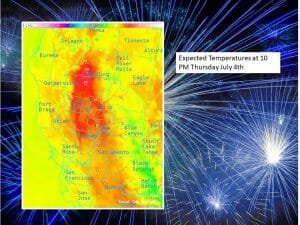 Upper trough starts to lift on Thursday afternoon so may see just a bit of warming then. A much larger increase in daytime highs is expected on Friday as high pressure builds back west over the state and 500 mb heights climb.

Highs are expected to range from a few to several degrees above normal Friday but continued onshore flow should keep valley temperatures out of the 100s.

Ensemble runs are in moderate agreement a trough off the West Coast will weaken and allow for a warming trend going into this weekend with high temps slightly above average and triple digits possible in the northern Sacramento Valley. Average conditions for this time of year are expected at the start of next week. Dry conditions expected through the period.