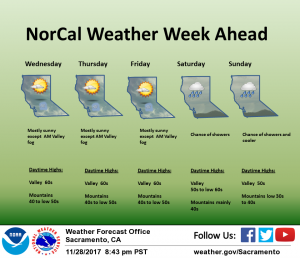 November 29, 2017 – Dry weather expected through the remainder of the week. Weather system may bring some precip to the mountains and northern portions of the CWA over the weekend.

Skies have cleared out and north to east surface pressure gradients have increased overnight in the wake of yesterday’s system that skirted the area. The KMFR-KSAC gradient is nearly 10 mbs while the RNO-SAC gradient is above 3 mbs resulting in locally gusty north to northeast winds of 25-35 mph in the foothills and mountains.

Satellite imagery shows that fog and stratus has been limited to an area along the eastern edge of the valley to the east of Sacramento and Stockton where the northwesterly flow down the valley is interacting with terrain. With mixing, northerly breezes will likely pick up this morning in the Central Valley as well.

System dropping down from the Gulf of Alaska may bring some showers to the northern third of the forecast area on Saturday along with cooler temperatures.

GFS/ECMWF similar in moving upper trof through the Pac NW Sat/Sat nite and in keeping lingering precip N of our CWA on Sun on the backside of the upper trof. After which, the runs diverge markedly with the GFS retrograding an upper low across the CWA and eventually forming a Rex Block along the West Coast, while the ECMWF builds a ridge over the area in the wake of the progressive trof.

The retrograding upper low will most likely be devoid of moisture as it crosses the continent yielding a dry forecast similar to its counterpart, but would also be a slightly cooler solution. For the most part, either model would result in Nly flow or katabatic winds that would preclude much fog, except in the mountain valleys/basins. The Nly winds would result in some adiabatic warming effects and max temps a few-several degrees above normal, while the dry air, subsidence and strong temp inversions result in strong radiational cooling overnight. Winds should subside at night due to decoupling in the lower atmosphere, except primarily over ridges.

A dprog/dt of the GFS suggests some model similarities with the latest ECMWF until the runs of the 28th when the GFS went to a less progressive and retrograding solution. This rather drastic/quick change yields lower confidence than the ECMWF at this time.