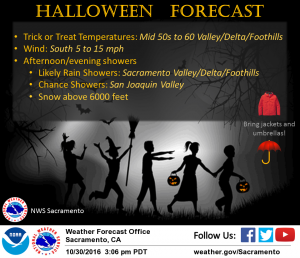 October 31, 2016 – A brief break from the wet weather for some areas of interior NorCal, then the next system brings a quick shot of precipitation to the region tonight. Unfortunately, Halloween evening looks wet for most of the area. Drier weather returns for the rest of the week.

Showers have continued to taper off across the region overnight as Sunday’s system continues moving east. Radar shows some lingering showers over the west slopes of the northern Sierra from around Blue Canyon northward up into Plumas County, and in the mountains to the north of Redding. Snow levels are quite high with the Oroville profiler indicating it was above 7K ft late last evening.

Temperatures are cooler across most of the area compared to 24 hours ago and generally range from the 30s and 40s in the mountains to the 50s elsewhere. 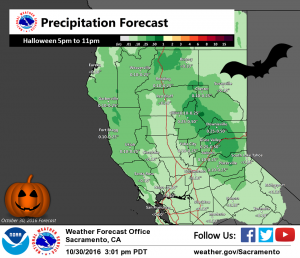 Another Pacific upper low moves inland later today and tonight spreading additional precipitation across the region. Models suggest a wet Halloween evening for most areas. Precipitation amounts look less than Sunday’s system, but continued cooling of the airmass should result in snow levels lowering to around 6K ft leading to some travel impacts over the northern Sierra passes by this evening.

This wave shifts east into the Great Basin Tuesday with lingering mountain showers possible during the morning hours. Upper ridging then builds over NorCal providing drier weather with minor warming through the mid-week period.

Dry weather continues into Friday and early Saturday as high pressure shifts eastward. High temperatures will remain near normal through this stretch.

The next weather system then approaches northern California on Saturday. The GFS is more bullish with precipitation than the ECMWF or Canadian, both of which keep precipitation mainly along the coast and north of our forecast area. With low confidence, we’ve maintained relatively low-end chances of precipitation across the region.

Drier weather settles in again next Sunday as high pressure rebuilds over California.