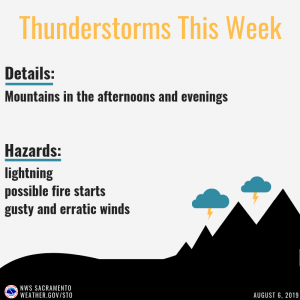 Less mid and high level cloudiness across the region early this morning as the plume of clouds and moisture moving up from the south has shifted slightly to the east into western Nevada. Onshore pressure gradients have begun to inch up a bit and profiler data indicate the marine layer is a little deeper compared to early Tuesday. All this adds up to slightly cooler temperatures compared to 24 hours ago across most of the region. Current temperatures range from the upper 40s in the colder mountain valleys to the mid and upper 70s across the milder portions of the Central Valley.

Gradual cooling returns today and continues through the remainder of the week as the low off the PacNW edges closer. This will lead to strengthening onshore flow and a deeper marine layer initially, but stronger synoptic cooling is expected as well late in the week. Highs are expected to cool to below average Thursday and continue into the weekend.

Limited elevated instability remains across the southeastern half of the forecast area, but it’s looking like the best potential for deeper high-based convection this morning will remain along and east of the CA/NV border ahead of a weak vort moving up from the south.

Stronger surface-based convection likely this afternoon along and east of the northern Sierra crest south of Lake Tahoe where forecast soundings indicate CAPE in excess of 1K J/kg. Deeper southwesterly flow will likely push the thunderstorm threat to the east of the Sierra crest by Thursday, though shower and thunderstorm chances will increase across the northwest corner of the state on Friday into Saturday as the closed low approaches.

Upper ridge starts building in over the eastern Pacific and west coast on Sunday bringing a warming trend. Daytime highs to start out the extended period are expected to climb to right about normal for this time of year. Confidence in remainder of extended forecast is not high. GFS ensemble members show a fairly large spread of solutions with maybe a lean towards ridging over west coast with some members and ecmwf showing troughing and cooler temperatures. For now, have gone with dry extended forecast for the CWA and temperatures a few degrees above normal for the first half of next week.