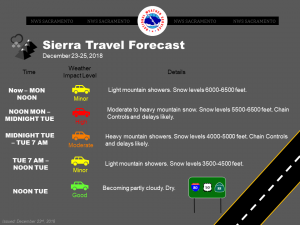 Calm before the storm across interior NorCal early this morning with varying amounts of cloud cover across the region and only a few areas of light precipitation. Some areas of thicker fog across the northern half of the Sacramento Valley. Temperatures remain rather mild ranging from the 30s in the mountains to the 40s to around 50 elsewhere. 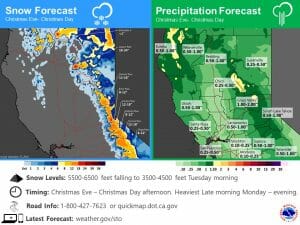 Satellite imagery shows the strengthening system off the coast to the west of Oregon presently. Light to moderate warm-advection precipitation will pick up again this morning across the mountains and northern Sacramento Valley, then the cold front is forecast to move quickly across NorCal this afternoon into this evening bringing a relatively brief shot of heavier precipitation along with the potential for thunderstorms. Some showers will linger later tonight into early Christmas as the filling system moves southeast of the area.

Strong forcing and increasing instability may allow for some embedded thunderstorms with enhanced rain rates with the front, but rapid storm movement should limit overall rain amounts at any one location. Nevertheless, it appears there is at least some potential for debris flow issues for the Mendocino Complex Fire burn area as higher resolution models continue to indicate a few rounds of thunderstorms for that area this afternoon. 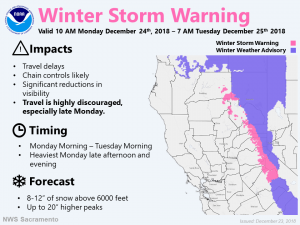 Snow is expected to return to the higher elevations of the northern Sierra by late morning with travel impacts likely to worsen late this afternoon and early this evening as the front moves in. Snow levels will remain high today, but lower behind the front this evening. 8-18 inches of snowfall accumulation expected over the higher passes with up to 2 feet over the peaks. Travelers over the Sierra passes are advised to travel this morning if possible, and to be prepared for winter driving including having chains.

The bulk of the rain for the Sacramento and Stockton areas will occur during the afternoon and early evening as the frontal band sweeps southward. A few thunderstorms will be possible with the frontal passage.

The storm system shifts east by early Christmas morning, so a significant drop off in precipitation is expected. Conditions for Christmas Day should be mainly dry through the day except for lingering mountain snow showers. Brisk northerly flow will bring drying and clearing into Thursday except for some lingering showers possible across the higher elevations.

Predominantly dry conditions are expected Friday through New Year’s Eve. On Friday, a trough will be digging into the Four Corners region with a highly amplified ridge building in through the day behind this feature. Dry and breezy conditions will prevail in the afternoon as an increased pressure gradient sets up over the Sierra. North winds across the mountains and the Sacramento Valley are expected to range between 20 to 30 mph.

There may be a small chance for precipitation Sunday into Monday per the ECMWF, but with the GFS dry and continuing ridging across the area, there is little confidence with these chances. It does look to be a bit colder in the mornings this weekend, with lows in the Valley in the low to mid 30s, reaching into the 20s and teens at higher elevations.