NEVADA CITY, Calif. June 1, 2016 – Firefighters are mopping up a vegetation fire next to the Juvenile Hall on Hwy 49. Reported at 3:52 am, the fire was most likely started by an escaped campfire at a homeless encampment.

Enormous potential for a major fire

Burning in steep terrain in a former mining area, the fire had the potential to develop into a major incident. “If this fire had happened at 2 pm instead of last night, the outcome might have been very different. This had enormous potential given the steep terrain, the dense brush and the current temperatures,” said John Hotchkiss, CAL FIRE NEU Prevention Officer who is investigating the origin of the fire.

Any smoke still visible is hit with water, earlier in the night retardant foam was used to coat the flat area at the head of the fire. It is not unusual for tree stumps to start smoldering again once the heat of the day hits them. Firefighters are still on scene, mopping up and hauling what seems like miles of fire hose back to the trucks. They will check the fire several times over the next few days.

The fire appears to have started at a homeless encampment. Burning downhill and spreading at the bottom of the hillside, the fire was almost impossible to see in daylight. The fire can be considered arson, according to Hotchkiss. The property is owned by the County of Nevada, trespassing and illegal camping are a frequent problem in the area. A trail from “Camp Manzanita” leads to another camp a little further north on Hwy 49.

A tour of the fire

Below are some of the photos we took this morning. What they can’t convey is the unmistakable smell of a wildfire. Chances are, everyone will be reminded of it very soon. 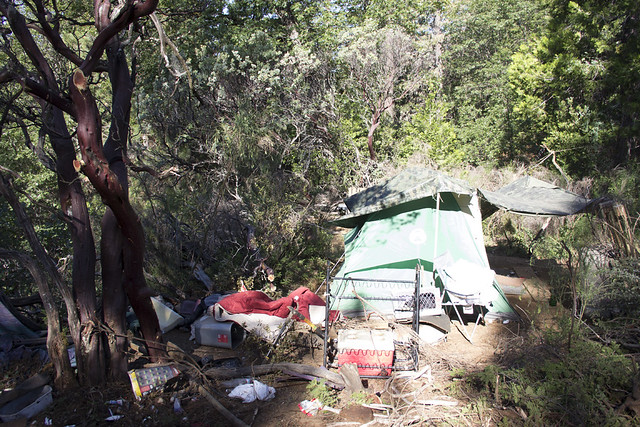