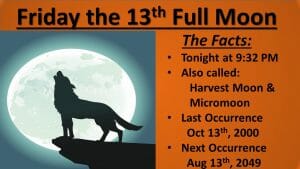 September 13, 2019 – Hot and dry weather expected through the remainder of the week. A change in the weather pattern will lead to cooler temperatures and a chance of showers and thunderstorms early next week.

A few high clouds, associated with a short-wave passing to the north, are spreading across the region early this morning. Current temperatures are running around 2-5 degrees warmer compared to 24 hours ago across most of the area and range from the mid to upper 30s in the colder mountain valleys to the 60s to around 70 across the Central Valley. 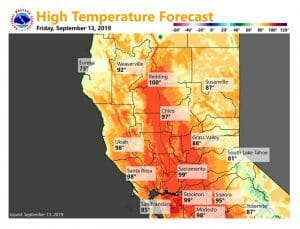 Hot and dry weather continues today and Saturday with highs expected to be around the century mark across warmest portions of the Central Valley.

Pattern change develops early next week as a sharp trough is forecast to move across the area on Monday. Transition to cooler weather begins Sunday ahead of the approaching trough with highs forecast to be around 5-10 degrees below Saturday’s with another 10-20 degrees of cooling expected on Monday.

In addition to bringing cooler weather, the trough will bring a quick shot of precipitation late Sunday night into Monday along with a chance of thunderstorms. QPF looks to average around a tenth to a third of an inch across the area. The higher peaks across the northern Sierra and Mt Lassen may see their first dusting of snow this season.

00Z Fri 9/13/19 Ensemble data showing some differences as the EPS 500 height anomaly moves the deep trof (-2 height anomaly with about a 2-5 yr return interval) through our region faster than the GEFS. The deterministic runs have followed suit and Tue could end up being drier than what the NBM gave us on the nite shift. The faster movement of the trof also meant a slight decrease in the amount of QPF in our area with the trend generally down a little from recent past runs. Still this trof is trending a little deeper and further south than what we have looked at over the last two days or so. It looks as if we can go back to our thinking of last nite with mean QPFs at RDD and BLU around a third of an inch, a tenth to a quarter inch around SAC, and around a tenth at MOD.

The source region and negative height anomaly will bring some unseasonably cold temps to our CWA. The cold Monday’s highs (some 10 to 20 degrees below normal) should moderate to 8 to 15 degrees below normal on Tuesday, then returning to near normal to slightly below normal for the latter half of the week. This is a little cooler than what we looked at last nite as we note that the GEFS anomaly shows more ridging and the likelihood of warmer temps than the EPS which is more neutral or normal in its 5H pattern over our area. We are leaning to the EPS solution for a couple of reasons; one we note that the 13/00z run of the GFS and the GEFS for Thu/Fri are totally out-of-phase causing us to lean to the EPS, and two, the EPS is mostly outperforming its counterpart anyway in my local temp study for selected sites.