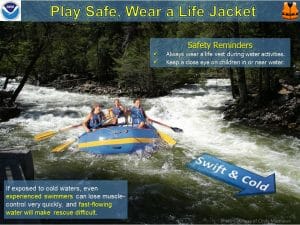 July 18, 2019 – Slight cooling the rest of this week, followed by a slight warm up early next week. Breezy winds through the Delta and over the Sierra crest at times.

Other than a few high clouds, skies are clear across interior NorCal early this morning. Current temperatures are milder compared to 24 hours ago and generally range from the mid and upper 40s in the mountain valleys to the 60s to mid 70s elsewhere.

Not much change in the overall pattern as a weak trough lingers along the West Coast into the weekend. Therefore, dry conditions and seasonably hot temperatures will continue.

Temperatures in the Delta Breeze influenced areas will vary slightly day-to-day depending on the depth of the marine layer and strength of onshore flow. 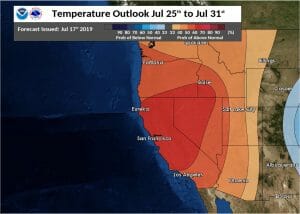 Monday will see a continued amplification of the large high pressure ridge over the Great Basin. With main ridge axis and subsidence well east of the CWA, daytime highs for the start of the extended period will remain near normal.

Little change is anticipated through the remainder of the extended. A small scale shortwave trough is progged to nudge the Great Basin ridge as it pushes northeast through the the Pacific northwest on Wednesday. This will cool temperatures just slightly but otherwise have minimal impact.

Temperatures bump back up to near or a little above normal on Thursday. In short, extended forecast remains dry with near normal temperatures and generally light winds except for occasionally breezy conditions over the Sierra crest and Delta region.