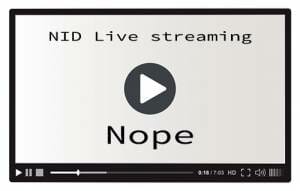 GRASS VALLEY, Calif. March 8, 2017 – Live streaming and video replay of public meetings is the norm for Nevada County, the Town of Truckee, the cities of Grass Valley and Nevada City. But NID is bucking the trend and four out of five directors have no intention of claiming YouTube, Periscope or Facebook Live fame.

Following a lackluster presentation from the irrigation district’s IT Analyst, Directors Wilcox, Miller, Drew and Morebeck clung to the rather antiquated notion that mediocre quality audio recordings are good enough for members of the public who cannot attend the district’s daytime meetings.

A system built in 2014 provides streaming audio of meetings in the boardroom, but only to anyone with access to a district computer. ” It’s not perfect, but there haven’t been any issues in almost two years,” the staff report states. Cost was under $200 and a few days of IT time. “The system has always had the capability to stream live outside of NID, and we have always had the option of uploading recordings to our website, or other service,” the report continues. Alas, that option has never been exercised.

The IT department contacted the county’s IT department and  learned that the county, Grass Valley and Nevada City share a service. IT “did not ask if meetings for the other agencies were streamed live, or just available as recordings.” [Editor’s note: Meetings are streamed live and available for playback] The service finds no favor with the analyst however and neither does NCTV, the local public access channel, given their limited viewer reach. The analyst discovered that using YouTube is free, and “It is possible that with a couple lower cost cameras, some attention to room layout, and a nice computer, we could provide our meetings to the public in either audio or video for little to no recurring costs to the district.”

IT staff provided an option matrix with various possibilities, from recording and posting audio or low or high resolution video to streaming and recording – either done in-house or by a third party vendor. Cost estimates for the various options ranged from a low of under $1,000 up to $20,000.

Not all motions are equal

Director Drew made a motion to “not spend any money” on any solution. He stated his mission was to manage district resources, not squander ratepayer dollars by “vicariously interacting with the public.” The motion did not get a second, but Chair Wilcox provided a “courtesy second” to enable the board to discuss the motion. Director Miller had trouble with voting for a negative and discussion ensued. Director Weber stated the issue has been languishing for over a year and that it was time for the district to step up. Regarding the estimated cost she noted the district has a $200,000 contract with a PR firm for Centennial Dam and said the comparatively small expense would provide much better outreach to the public.

Director Morebeck first mused that telecom companies are switching to metered connections and said with poor connectivity in his district any streaming would be costly to the public. He then compared being at the meeting in person to being at a live concert, “you have to be in the moment.” Later on, he voiced concerns that “if you put meetings on YouTube, anyone in the world can see it.” He was reminded gently that anything posted anywhere on the worldwide web is basically available to anyone. Finally, Drew’s motion failed by a 1-4 vote.

Director Weber then made a motion to provide live streaming and archived video to the public. Her motion did not get a second from another board member and Chair Wilcox did not provide equal treatment with a “courtesy second” to open the motion for discussion. It “died for lack of a second,” in government parlance.

The public wants streaming and has solutions

The League of Women Voters, the Federation of Neighborhood Associations and SYRCL have asked NID to broadcast the meetings for a number of years. Today, several members of the public spoke in favor of providing streaming and archived video of NID meetings.

Helen Williamson, representing the League of Women Voters, once again urged the board to consider streaming the meetings. She was interrogated by Director Drew who wanted to know if the League was streaming their meetings. When she replied they weren’t and added the League was not a public agency, Drew cut her off with “That’s all I need to know.”

Other members of the public stated the district would benefit from better public information and alleviate the impression the district is not fully transparent.

Director Miller made a motion to have some video recording, but withdrew his motion after a brief and confusing discussion.

Finally, Chair Wilcox made a motion to continue with audio-only recordings. The files will be available for one year, after which they will be removed from the district’s server. The motion passed unanimously.

Still not available from the district are any past board or committee meeting agendas and past committee minutes. Many maps and presentations are only available at meetings.