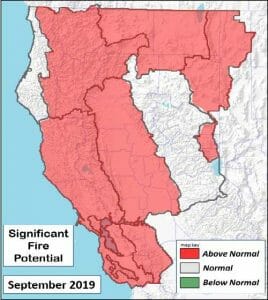 September 3, 2019 – The 4-month Predictive Service outlook calls for warmer and drier than normal conditions in the North Ops region through December. The outlook also calls for more than the usual amount of high pressure ridging in the eastern Pacific, which would lead to more than the typical amount of N-NE/Offshore wind events. The high elevation snow pack has led to high soil and fuel moisture values at elevations above 6000 ft, and these areas will likely remain at the lower end of normal, fire-wise, for the remainder of the season.

Lower and middle elevations (below 6000′) will see increasing grass/brush fire occurrence in September as dry N-NE/Offshore wind events become more common, and the potential of fires growing to large sizes is Above Normal. Heavier fuels below 6000 ft are also dry enough to carry fire.

Lightning typically decreases in amounts and frequency in September, but two potential lightning events are in the forecast for the first 10 days of September at this time. Due to the moist conditions, any lightning strikes at elevations above 6000 ft will not be as likely to produce large fires, compared to 2018 when the snow pack was below normal. In September most areas below 6000 ft have Above Normal Significant Fire Potential. 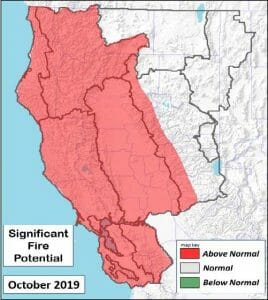 In October areas east of the Cascade-Sierra crest drop back to Normal while most areas west of the crest below 6000 ft remain Above Normal. Even with below normal rainfall in October and November, enough is expected to drop all areas back to Normal Significant Fire Potential in November and December. If very little to no rain falls in October we could see Above Normal potential extend into November at lower elevation areas west of the crest.

The annual fuel loading of the grass crop is well above normal for a fourth consecutive year, and is mostly cured. Live fuel moisture is still at normal to above normal values throughout the region, and has only dropped below the critical 100% value at middle and lower elevations recently. Live fuel moisture values remain at 100% or more at elevations above 6000 ft. Dead fuel moisture has been tracking near the “normal” curve for most of the fire season, with a small increase coming in early August after the northern portion of the region received wetting rain, but normal values themselves are at their peak seasonal extremes in August and September. Warm and dry weather will continue to keep fuels near the “normal” curve in September. Other fuels issues that will contribute to significant fire potential in September and October include the following: A rare heavy snow event in the northern Sacramento Valley has led to lots of dead and down trees and limbs, and an increase in tree mortality in the past year, as shown in the Tree Mortality Task Force density map.

– Warmer and drier than average through December.
– ENSO-neutral as fall begins.
– Above average fine fuel crop, mostly cured below 6000 ft.
– Live fuel moisture values below critical levels at lower and middle elevations, but still higher than seasonal averages.
– Offshore wind season underway.
– Above Normal Significant Fire Potential most areas below 6000 ft in September and west of the Cascade-Sierra crest in October. Normal Significant Fire Potential all areas in November – December.
– Potential of Above Normal into November at lower elevations from western Cascade-Sierra slopes to the coast if fall rains are delayed.