Editor’s note: The South Yuba River at the 49er Bridge is running at approximately 240 cubic feet per second – use extreme caution. 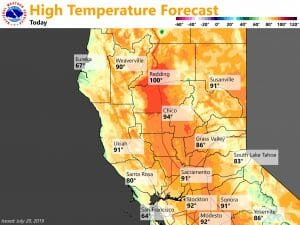 July 20, 2019 – Gradual warming trend is forecast this weekend into next week with widespread triple digits possible in the Central Valley by next Wednesday. There is a slight threat of afternoon thunderstorms over the northern Sierra crest next Thursday.

Weak upper troughing moving through the PacNW with southern portions extending over northern portions of CA. Troughing has resulted in strong Delta breeze with marine layer about 2500 feet deep at Fort Ord. Potential for some patchy morning stratus to develop in southern portions of the Sacramento Valley, but should be short-lived. Short wave trough moves east today as heights begin to slowly increase from the Desert SW. High temperatures today expected to be near to slightly above Friday`s value except little change near the Delta. 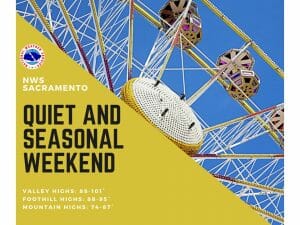 4 corners upper high is progged to build from the southeast over Interior NorCal Sunday into early next week. This will result in daytime temperatures trending up to slightly above normal. Triple digit heat expected in the Northern Sacramento Valley, becoming widespread throughout much of the Central Valley by the middle of next week.

Southwest ridge forecast to build northwestward later next week resulting in a return to above average temperatures across interior NorCal. In addition, monsoon moisture working its way northward around the periphery of the high may lead to late day thunderstorms over the northern Sierra Nevada, mainly to the south of Lake Tahoe.