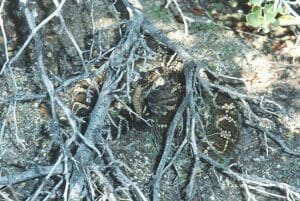 April 5, 2019 –With the coming of spring and warmer weather conditions, snakes of many species are through hunkering down, making human encounters with these elusive creatures more likely. Although most native snakes are harmless, the California Department of Fish and Wildlife (CDFW) recommends giving the venomous rattlesnake a wide berth and knowing what to do in the rare event of a bite.

“Snakes really get an unfair bad rap, when they actually play an important role in California’s ecosystems,” said CDFW’s Keep Me Wild program coordinator Lesa Johnston. “Like most wild animals, snakes prefer to keep to themselves and are not naturally aggressive. Taking the time to learn about safety precautions before going outdoors can make all the difference.”
Rattlesnakes are widespread in California and are found in a variety of habitat throughout the state from coastal to desert. They may also turn up around homes and yards in brushy areas and under wood piles. Generally not aggressive, rattlesnakes will likely retreat if given room and not provoked or threatened. Most bites occur when a rattlesnake is handled or accidentally brushed against by someone walking or climbing.
On occasion, rattlesnake bites have caused severe injury – even death. However, the potential of encountering a rattlesnake should not deter anyone from venturing outdoors. The California Poison Control System notes that the chances of being bitten are small compared to the risk of other environmental injuries. Most bites occur between the months of April and October when snakes and humans are most active outdoors.
CDFW provides tips for safely living in snake country on its website, as well as tips for keeping snakes out of your yard and what do to do (and not do) in the event of a snake bite.
Additional resources can be found on the CaliforniaHerps.com Living with Rattlesnakes webpage.
Advertisement