NEVADA CITY, Calif. August 29, 2019 – Sheriff Moon is excited to announce the appointment of Undersheriff Alicia Burget and the promotion of Captain Sam Brown. 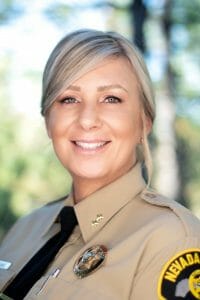 Undersheriff Burget began her law enforcement career as a Group Supervisor for Nevada County Probation at Juvenile Hall in 1998 while putting herself through the Yuba College Police Academy. She graduated top of her class earning the Director’s Award and shortly after became a Reserve Deputy for the Nevada County Sheriff’s Office. In February of 2002, Alicia became a full-time deputy with the Nevada County Sheriff’s Office and has held the following positions: patrol, Court Security/Bailiff, Search and Rescue Coordinator, Detective in the Major Crimes Unit and Investigator in the Narcotics Unit.

In 2003, Alicia received the Bronze Star for bravery from the Nevada County Sheriff’s Office during an incident involving a domestic violence call with a woman being held hostage and the man later setting the house on fire with deputies inside. Alicia promoted to Sergeant in December of 2008, Lieutenant in 2013 and Captain in 2017. Through these promotions Alicia has worked in nearly every division of the Sheriff’s Office and was most recently the Jail Commander overseeing all operations at the Wayne Brown Correctional Facility. Alicia possesses a bachelor’s degree in Criminal Justice Management and has participated in the CEO Advisory Council and is a graduate of the Nevada County Community Leadership Institute. Alicia is a speaker at the Citizen Academy, Employee Academy and NCCLI class with her speech on Women in Law Enforcement.

Alicia resides locally with her husband, Jeff and their two dogs.

“Alicia is a strong, determined and intelligent leader, who will excel on day one as our Undersheriff”, said Sheriff Moon. “Her commitment to public service in Nevada County is apparent by her dedicated service over the last twenty-one years in our community.” 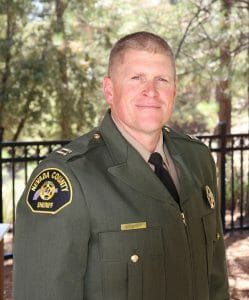 Captain Brown began his law enforcement career as a Correctional Officer as the Wayne Brown Correctional Facility in 2003. Sam attended the P.O.S.T. Peace Officer Academy in 2005 where he received the Academic Achievement Award.

As a Deputy Sheriff, Sam worked in various assignments including as a Court Security Officer and Bailiff, Field Training Officer and a Detective in the Major Crimes Unit. Sam was promoted to Sergeant in 2012 and later promoted to Lieutenant in 2017 where he managed the Operations Division overseeing patrol and animal control operations. Most recently Sam has worked as the Executive Lieutenant in the Wayne Brown Correctional Facility and will be assuming the role of Jail Commander upon his promotion.

Sam is a graduate the Nevada County Community Leadership Institute and possesses a bachelor’s degree in psychology.

Sam lives locally with his wife and two children and is on the board of the Water Otters swim team along with coaching the Goldmine Wrestling team.

Sheriff Moon recognized that Sam’s “experience in all three divisions of our office makes him decidedly qualified for the position of Captain. As our Jail Commander, Sam will continue his track record of hard work and management skills to oversee the very important division of Corrections.”