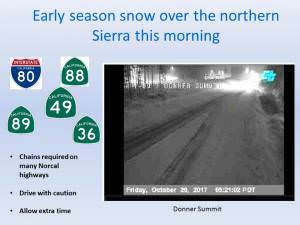 October 20, 2017 – Frontal system bringing rain and snow to the Sierra this morning. A few inches of snow possible above 7000 feet. Showers possible northern mountains through Saturday. Warming temperatures through early next week. Slightly cooler temperatures for the second half of the week but remaining dry and warmer than normal. 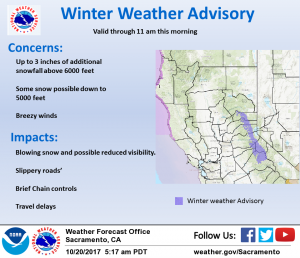 Back edge of frontal band dropping southeast through northern California now along a line from about Blue Canyon to Modesto. Precipitation amounts with this system have maxed out around 1 inch with around 1/2 inch common. The front will drop southeast of the CWA by 18Z. Models bring another shortwave system through the Pacific Northwest this afternoon for a continued threat of showers over the northern mountains through this evening.

Temperatures continue to cool today with daytime highs expected to drop to about 10 to 15 degrees below normal. Upper ridging will bring some warming on Saturday but another shortwave riding over this ridge will bring another threat of light showers over the northern mountains again through the day.

The upper ridge continues to build over the west coast on Sunday for more warming with any precipitation threat being pushed well north of the forecast area. Highs on Sunday with push upward to near normal for this time of year. Daytime highs are forecast to climb another 5 to 10 degrees on Monday as the upper ridge amplifies along the west coast.

Warm and dry conditions will dominate NorCal during the extended forecast period as high pressure lingers over the region. Daytime highs will range 10-15 degrees above normal through Thursday. Valley highs will remain in the mid to high 80s while the foothills and mountains will range in the 70s to 80s. Could see gusty winds Monday in the western Sacramento valley as the ridge axis increases over the west coast.

CDC: Use of Cloth Face Coverings to Help Slow the Spread of COVID-19