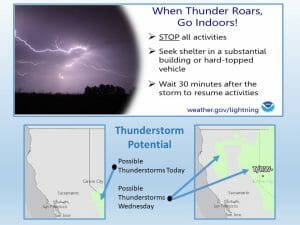 Cooling to near normal most areas by Thursday with continued near normal daytime highs into next week. Monsoon moisture will creep north for a threat of afternoon mountain thunderstorms over the Sierra today then northward into the northern mountains Wednesday and Thursday.

Northern California wedged between high pressure over the four corners area and an upper trough digging in over the eastern pacific. Travis AFB showing a healthy delta breeze this morning resulting in temperatures several degrees cooler in the Delta and Sacramento area.

Most other places will see a slight cooling today. south to southwest flow aloft will bring monsoon moisture a bit farther northward up the Sierra today and may see some isolated thunderstorms over the northern sierra this afternoon but any activity should remain south of Tahoe.

The upper low off the coast edges a little closer on Wednesday bringing slightly more cooling although daytime high temperatures will still come in a few degrees above normal. Southerly flow aloft will spread monsoon moisture over the CWA Wednesday afternoon.

Models not in good agreement as to where main instability will be but the northern sierra and coast range seem to be the areas of most likely chances. moisture progs show little moisture below 700 mb so rainfall from any thunderstorm activity will be minimal.

Although dry thunderstorms and fire starts may be a concern, moderate RH levels and isolated nature of lightning should reduce overall fire threat some.

The upper low is forecast to clip the northwest corner of the state on Thursday. Daytime highs should drop to right around normal for this time of year. Isolated mountain thunderstorms will again be a possibility over the sierra cascade range and Shasta county mountains. Upper ridging rebuilds on Friday for an end to the mountain shower threat and slightly warmer temperatures.

Little change to the extended forecast this morning as ensemble guidance and deterministic models point towards troughing this weekend. NMB guidance has backed off on PoP for Sunday, but still hints at the chance for some isolated showers and storms over the coastal range, Cascades, and Sierra. Other than that, expect to see near normal temperatures for the weekend, and slightly below normal temperatures for early next week.