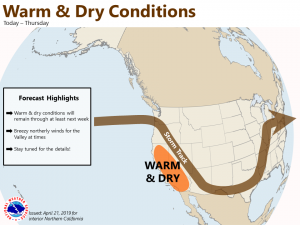 April 22, 2019 – High pressure will build over the region with warm temperatures and dry conditions. High temperatures will peak near the middle of the week.

Upper level ridge will build across NorCal today behind departing trough over the Great Basin region. This will provide dry conditions with warmer temperatures. Surface gradient will also become enhanced between the ridge and trough with breezy north winds developing.

A few gusts to 25 mph will be possible throughout the Sacramento Valley. Afternoon highs in the mid to upper 80`s over the Valley will be 10 to 15 degrees above normal. 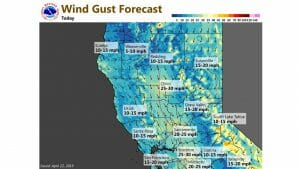 Ridge will remain in place through the week providing the warmest weather of the year thus far. Most Valley locations will reach the first 90 degrees of the season Tuesday and Wednesday. A system passing north of the area Thursday may bring a few showers or thunderstorms to the Southern Cascades and Shasta county.

The broad upper ridge situated over the southwestern U.S. through Thursday will have advanced into the Rockies by Friday. This will give way to a split in the jet streams as a potent upper low is expected to dig toward extreme Southern California by late in the weekend. The more southward trajectory should keep the primary impacts down over the southern half of the state. However, did keep the chance for precipitation over Tuolumne County during the weekend. Any northward adjustment of this upper low would allow for impacts over additional counties.

Where the guidance has struggled is with resolving the amplified northern stream flow. Operational models which include the GFS and ECMWF solutions show a variety of scenarios indicative of the uncertainty at hand. Ensemble means are more clustered and keep the primary storm track well to the north up toward Washington and Oregon. Based on the idea of lower heights infiltrating the West Coast, expect temperatures to drop Sunday into next Monday (April 29). At this point, Valley temperatures should fall back into the mid 70s while mountain locations stay in the upper 40s to lower 50s.