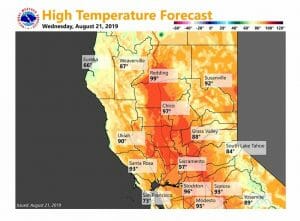 August 21, 2019 – Strengthening high pressure will result in dry weather with above average temperatures into next week.

Satellite imagery shows the upper trough approaching the PacNW with a few weak short-waves out ahead of it bringing some high clouds to NorCal. Little if any stratus is noted along the coast and profiler data indicate the marine layer has been mixed out and is very shallow (less than 500 ft).

Current temperatures are running within a couple of degrees of readings 24 hours ago and generally range from the 40s in the mountain valleys, to the upper 50s and 60s across the Central Valley.

Despite the trough passage to our north today, temperatures will begin to increase across the region as onshore flow weakens. High pressure will strengthen Thursday into the weekend resulting in above average temperatures with most valley locales expected to see highs around, or slightly above, the century mark.

Upper high extends NW from the Desert SW over interior NorCal as EPAC high extends inland. This will result in continued above normal temperatures Sunday into next Wednesday.