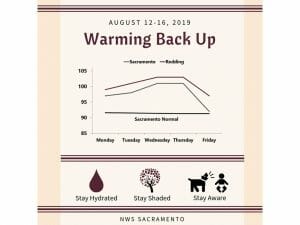 August 12, 2019 – Dry weather will prevail through the week. A warming trend builds through mid-week with valley highs reaching triple digits. Cooler weather returns for the end of the week.

Clear skies cover interior NorCal early this morning. The marine layer is very sparse with profilers indicating its depth at less than 500 ft.

Current temperatures are milder compared to 24 hours ago and generally range from the 40s in the colder mountain valleys to the mid 60s to lower 70s through the Central Valley.

Hotter weather returns to the region this week as the weak lingering trough gives way to high pressure expanding northward.

Highs will approach the century mark through the valley today, and will likely be in the 100-105 range Tuesday thru Thursday (around 5-10 degrees above average for mid-August). Milder overnight lows are also expected with minimal influence from the Delta Breeze.

Ensemble means continue to indicate an upper level trough deepening along the West Coast late this week. Therefore, a cooling trend is anticipated Friday into the weekend, with temperatures 3 to 8 degrees cooler than normal for mid August.

Coolest readings are expected over the weekend, with Valley highs generally in the mid 80s to low 90s. Ensembles keep the forecast area dry as this system moves through the region.

By early next week, daytime temperatures will warm up slightly, and are expected to be near seasonal normals.