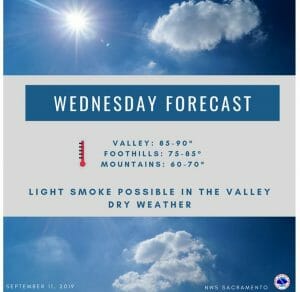 September 11, 2019 – Increasing temperatures and dry weather expected through late week. A wind shift today may create potential smoke issues for the Sacramento Valley from the surrounding fires. A stronger system passes through early next week bringing cooler weather and precipitation.

The system that brought showers and thunderstorms to some NorCal mountain areas yesterday continues to move east, while upper ridging takes its place over California.

At the surface, shifting winds from the north will exist today through early Thursday which may cause smoke from multiple wildfires to make its way into the southern portion Sacramento Valley by the afternoon hours.

Highs today will be anywhere from 5 to 10 degrees warmer than yesterday, with this trend of increasing temperatures continuing through late week.

Friday and Saturday highs are back to above normal into the mid and upper 90s in the Valley, with mountain temperatures generally into the 70s these days.

At this time it appears the best chances for showers will be over the mountains and in the Sacramento Valley north of I-80. Potential for afternoon to evening thunderstorms exists over the northern and eastern mountains.

Activity winds down Tuesday as trough shifts into the Great Basin, however a slight chance of afternoon deep moist convection will continue over higher terrain of Plumas County and Northern Sierra Nevada.

High temperatures Monday and Tuesday expected to be upwards of 10 to 20 degrees below normal. Upper ridging begins to build over the area Wednesday with drier weather and warming temperatures.