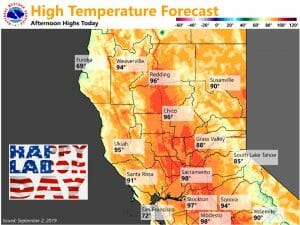 September 2, 2019 – Above normal temperatures next few days. Monsoon moisture will creep up the Sierra for a threat of afternoon thunderstorms over the crest Tuesday and Wednesday.

Near to a little above normal daytime temperatures Thursday and the end of the week.

Just a slight overall cooling today as a trough over the eastern Pacific edges towards the coast. Fog product Satellite image indicated coastal stratus layer is fairly broken up this morning so not expecting coastal stratus in the delta today. Southwest flow aloft should keep any monsoon moisture south and east of the forecast area today.

Eastern Pacific trough continues to dig in off the coast on Tuesday. Not expecting much change in daytime highs but upper flow turns a little more southerly so some monsoon moisture may make it up the Sierra into the northern Sierra and CWA. For Tuesday and Tuesday evening, any Sierra showers or thunderstorms should remain south of the Tahoe region. 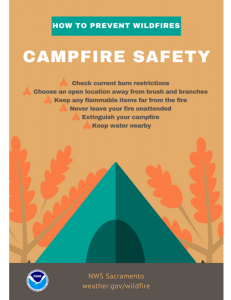 As the upper trough edges closer to the coast on Wednesday, daytime highs cool a bit more. A more southerly flow aloft will bring showers or thunderstorms farther up the Sierra so could see showers all the way up into eastern Shasta county.

The offshore low finally opens and shifts to the northeast on Thursday clipping the northwest corner of the state. Daytime highs are expected to drop to near or even a little bit below normal. By the max heating period of the day the main trough axis is forecast to be over the northern CWA with main lift north of the CWA. Therefore, am keeping Thursday pop free across the CWA for now.

A brief period of ridging is forecast for Friday, which will bring another day of mostly clear skies to region. Another trough is expected to pass through the PacNW over the weekend, which could bring some chances for some showers and storms over the coastal range, Cascades, and Sierra.

NBM guidance has trended wetter tonight which is reflected in the forecast. Deterministic models keep most of the precip chances to the north and northwest of our forecast area, so this will be something we keep an eye on over the coming the days.

A decreasing trend in temperatures is finally seen Friday through the end of the weekend due to the above systems. Valley highs in the low to mid 90s Friday afternoon will decrease by 5-10 degrees by Sunday.