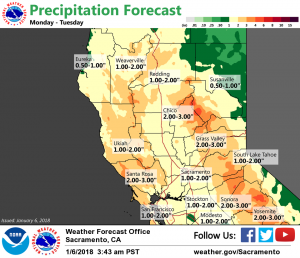 January 6, 2018 – Showers linger across the Sierra through this afternoon before dry weather briefly returns for the rest of today into Sunday. Patchy valley fog possible Sunday morning. Stronger and wetter storm moves through Monday into Tuesday.

Light rainfall showers continue this morning over the Motherlode and Sierra south of Highway 50, and may linger through the afternoon. Clearing behind a departing front has allowed and area of low clouds and patchy fog to develop in the Valley, generally north of I80, and in mountain basins and river valleys. The fog is quickly dispersing, but some of the low clouds may linger into the afternoon. This may keep high temperatures slightly lower for today. Forecast looks on track, no changes made.

Confidence continues to improve for a moderately wet system Monday and Tuesday. As snow levels drop by Tuesday morning, this looks increasingly likely to impact mountain travel at pass levels, dropping down below 6000 feet during the day. Am considering a Winter Storm Watch for this storm event.

Area of light to moderate rainfall continues early this morning across the Sierra and in the Valley generally along and south of Interstate 80. 24 hour totals range from around 0.10 to 0.75 in the valley with 1 to 3 inches across higher elevations. Aforementioned area of rain will slowly shift southeast out of the area this morning, with a few showers lingering across the Sierra through the afternoon hours. Colfax snow level radar currently reading around 8500 feet, but colder air should start to filter in and drop snow levels to around 6500 feet by late morning. Bulk of precipitation will have tapered off by then, but it may be enough to drop a few inches near pass levels and cause some slick roads so travelers should be aware.

Upper ridging temporarily builds over the area tonight into Sunday with dry weather. Lingering surface moisture and clearing skies should allow for the formation of fog in the valley near daybreak tomorrow, mainly from about Marysville southward. Cannot rule out some patches of dense fog, but hard to pinpoint where at this point.

Attention then quickly shifts to more substantial storm system brewing out in the Pacific. This storm looks to be the wettest the area has seen since November. IVT progs continue to max out in the 700 to 750 kg/m/s range which would classify this as a moderate atmospheric river event. As it approaches the West Coast, precipitation should shift inland Monday morning and continue to impact the area through Tuesday.

Models are in good agreement so confidence in forecast continues to build. Widespread moderate to heavy rainfall looks likely across the area. Latest solutions have come in a bit wetter so have bumped up precipitation amounts accordingly. 1-2 inches possible across the valley with 2 to 5 inches in the mountains.

Given dry conditions across the area, not expecting too much in the way of impacts from rain, other than the typical slick roads and a minor concern for some debris flow across recent burn scars.

Snow levels will start out high, generally above 8000 feet, as warm moisture tap moves in, but will fall sometime Monday night into Tuesday to around 6000 feet. Timing of this drop still a bit uncertain, but current forecast has between 6-12 inches at pass levels. Travel delays and chain controls possible, especially by Tuesday morning, so those with travel plans should keep an eye on the latest forecast. Lastly, breezy to gusty southerly winds will accompany the system later Monday into Tuesday.

The eastern Pacific ridge will likely rebuild during the middle of next week resulting in drier weather across northern California. A series of shortwave troughs then move through the Pacific Northwest late in the week, and depending on how far south they sag, far northern CA may see some light precipitation at times. 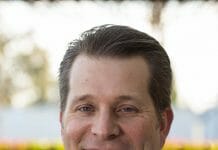 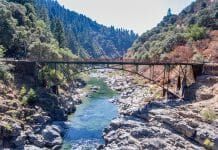