January 28, 2020 – Earthquakes along a complex series of faults in the upper plate of New Zealand’s northern Hikurangi Subduction Margin were responsible for coastal uplift in the region, according to a new evaluation of local marine terraces.

The findings, reported in the Bulletin of the Seismological Society of America, could shape new evaluations of seismic hazard in New Zealand. They suggest that earthquakes rupturing multiple faults may contribute more than subduction earthquakes to damaging uplift in the area.

Using radiocarbon and other methods to date the marine terraces at two North Island sites, Puatai Beach and Pakarae River mouth, Nicola Litchfield of GNS Science and her colleagues conclude that the uplift events that created the terraces occurred at different times between the two sites. This suggests that the uplift was not the result of subduction earthquakes or single-fault upper plate earthquakes.

The pattern of uplift seen in the marine terraces led the researchers to map new offshore faults in the region, which they think may be one source of these upper-plate earthquakes, said Litchfield.

The Hikurangi Subduction Margin lies along the eastern edge of North Island, where the Pacific and Australian tectonic plates collide and the Pacific plate slips under the island. Recent New Zealand earthquakes involving multiple fault ruptures and coastal deformation, such as the magnitude 7.8 Kaikoura earthquake in 2016, have prompted seismologists to evaluate the mechanisms behind these complicated sequences, Litchfield said–especially along the remote areas of the northern Margin where there have been fewer studies overall.

Marine terraces are created when shorelines are raised above sea level by uplift at the coast, and they record the time and amount of uplift. Based on the geological evidence from other sites in New Zealand, “we are confident that each terrace represents an individual earthquake,” Litchfield said.

Previous radiocarbon dating studies suggested that the youngest marine terraces at Puatai Beach and Pakarae River mouth were created at the same times. But Litchfield and colleagues decided to revisit these dates with a more comprehensive examination of the terraces. At each site, the researchers did extensive trenching “to see what the stratigraphy was, and to carefully sample, and then use more than radiocarbon dating techniques to get high resolution ages,” said Litchfield.

The different terrace ages at each site combined with modeling of uplift from earthquakes on newly mapped offshore faults allowed the researchers to rule out a subduction earthquake or single-fault upper-plate earthquake as the cause of uplift.

Researchers will need to learn more about the extent and orientation of the newly mapped offshore faults, and model how they might rupture together, to fully evaluate how they impact overall seismic hazard, Litchfield said. “Simply having more faults offshore, some of them quite close, means that there is more earthquake and tsunami hazard,” she noted. “We don’t know yet how that might be balanced by the fact that there is less subduction earthquake hazard in the model, though.” 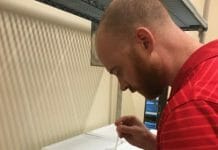