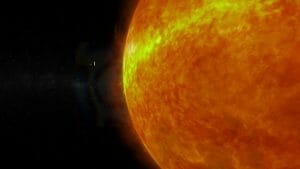 April 5, 2019 – Parker Solar Probe has successfully completed its second close approach to the Sun, called perihelion, and is now entering the outbound phase of its second solar orbit. At 6:40 p.m. EDT on April 4, 2019, the spacecraft passed within 15 million miles of our star, tying its distance record as the closest spacecraft ever to the Sun; Parker Solar Probe was traveling at 213,200 miles per hour during this perihelion.

“The spacecraft is performing as designed, and it was great to be able to track it during this entire perihelion,” said Nickalaus Pinkine, Parker Solar Probe mission operations manager at APL. “We’re looking forward to getting the science data down from this encounter in the coming weeks so the science teams can continue to explore the mysteries of the corona and the Sun.”

Parker Solar Probe began this solar encounter on March 30, and it will conclude on April 10. The solar encounter phase is roughly defined as when the spacecraft is within 0.25 AU — or 23,250,000 miles — of the Sun. One AU, or astronomical unit, is about 93 million miles, the average distance from the Sun to Earth.