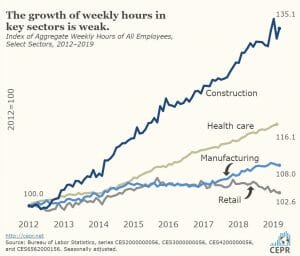 April 5, 2019 – The Bureau of Labor Statistics reported the economy added 196,000 jobs in March, a sharp bounce back from the 20,000 originally reported for February. This figure was revised up to 33,000, which brought the average over the last three months to 180,000. The unemployment rate was unchanged at 3.8 percent.

While the job growth figure for March is healthy, there is some evidence that wage growth might actually be slowing in spite of the relatively tight labor market. Wage growth over the last 12 months was just 3.2 percent, down from 3.4 percent in February. The annualized growth rate for the last three months (January, February, March) compared with the prior three months (October, November, December) was just under 3.0 percent. This evidence of slowing is limited, but there certainly is no basis in this report for believing that a tight labor market is creating inflationary pressures in the economy.

There are other signs of weakening in the labor market. The percentage of unemployment due to voluntary quits fell to 12.5 percent. By comparison, in 2000, when the unemployment rate averaged 4.0 percent, the percentage due to voluntary quits averaged 13.7 percent. There was also a modest uptick in the duration measures of unemployment with both the average and median durations rising, as well as the share of long-term unemployed. This continues rises seen in February.

While the number of people working part-time for economic reasons rose slightly from the recovery low hit in February, it is down by almost 10 percent from its year-ago level. The number of people working part-time voluntarily is again down from year-ago levels, possibly indicating greater difficulty in getting health care insurance outside of employment.

On the establishment side, health care was the largest contributor to job growth, adding 49,100 jobs. Growth in the sector has accelerated sharply in recent months, averaging 42,500 since November, compared with an average of just 27,100 in the year from November 2017 to November 2018. Professional and technical services added 34,100 jobs, somewhat faster than its average 25,900 over the last year. Restaurants added 27,300 jobs, in line with its average 25,700 jobs over the last year.

Construction added 16,000 jobs, which did not fully offset the 25,000 drop reported in February. However, a sharp jump of 56,000 reported in January means the three-month average is still 15,700. Manufacturing lost 6,000 jobs after adding just 1,000 in February. This is the first decline since July of 2017. The index of aggregate hours in manufacturing is 0.3 percent below the December level, suggesting some real weakening in the sector.

Retail lost 11,700 jobs in March after losing 20,200 jobs in February. Employment is now 35,900 (0.2 percent) below year-ago levels. The declines were spread across categories with even nonstore retailers (largely Internet) losing jobs.

Trucking lost 1,200 jobs in March after adding just 100 in February. The temporary help sector lost 5,400 jobs. With a big decline also reported in January, it has lost an average of 9,500 jobs over the last three months. This sector is not as much an indicator of future job growth as in the past, but the weakness in this sector and trucking (fewer goods being shipped) is worth noting.

This should be seen as a mostly positive report with some significant warning signs. The strong job growth shows that the weak February figure was an anomaly. The increases in employment rates for prime-age men, and especially among younger men, indicate that we have not yet hit any limits on labor force expansion.

The warning signs include the slight slowing in wage growth, the drop in the share of unemployment due to quits, and the increasing duration of unemployment spells. However, none of these suggest that the recovery is likely to end any time soon.

The Jobs Byte is CEPR’s in-depth analysis of the employment data released by the Bureau of Labor Statistics every month.