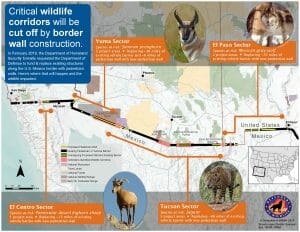 WASHINGTON, DC, Sept. 19, 2019 – The Department of the Interior has authorized a transfer of 560 acres of federal land to the U.S. Army for military use along the U.S.-Mexico border, which would facilitate up to 70 miles of wall construction on the southern border.

The transfers include more than 300 acres of land in Yuma County, Arizona, more than 200 of which is in Cabeza Prieta National Wildlife Refuge, as well as 110 acres in the El Paso County, Texas and 43 acres in San Diego County, California.

Cabeza Prieta National Wildlife Refuge, one of the last remaining undeveloped parcels of the Sonoran Desert, has been the cornerstone for recovery of the endangered Sonoran pronghorn and is home to 275 animal species and almost 400 plant species. The refuge is over 90 percent designated wilderness area making it the largest wilderness refuge in the lower 48.

Defenders of Wildlife has produced an infographic detailing the wildlife and irreplaceable public lands that will be impacted by construction projects along the border, which can be viewed here.

Jamie Rappaport Clark, president and CEO of Defenders of Wildlife, issued this statement:

“This move by Secretary Bernhardt is another example of this administration’s complete disregard for our country’s wildlife, wild lands and the public interest. The Interior Department should protect these irreplaceable natural resources, rather than bending to the administration’s absurd claim that handing over public lands to the military will save our resources from the ‘crisis’ at the border.

“The borderlands, especially areas designated as national wildlife refuges, are among the most precious and pristine ecosystems left in the U.S. Once they are torn up by bulldozers, they can never be fully restored. Defenders of Wildlife will continue to fight construction of any physical barriers that will destroy communities and wildlife in the borderlands.”

Defenders of Wildlife is dedicated to the protection of all native animals and plants in their natural communities. With over 1.8 million members and activists, Defenders of Wildlife is a leading advocate for innovative solutions to safeguard our wildlife heritage for generations to come. For more information, visit defenders.org/newsroom and follow us on Twitter @Defenders.