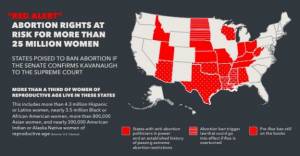 “Judge Kavanaugh’s record of blocking abortion access and birth control is already a clear disqualification. The serious allegations of sexual assault and his hyper-partisan and aggressive testimony are only further proof that he does not have the judgement to serve on the highest court of the land. This isn’t theoretical: More than 25 million women are watching their health and rights hang in the balance of Kavanaugh’s confirmation. There is no denying that a vote to confirm Brett Kavanaugh to the Supreme Court of the United States is a vote against the right to safe, legal abortion; a vote against those who access health care through the Affordable Care Act; and a vote to ignore survivors of sexual violence.”

“Women of color will be hit the hardest if Kavanaugh is confirmed. Because of the history of systemic racism in this country, women of color have had less access to health care, and so we have never had full access to abortion or reproductive rights as a community. For us, the promise of reproductive freedom and autonomy has yet to be realized.  The Kavanaugh nomination will make this promise an impossibility and imperil the health and lives of Black women — and all women of color. The Senate must reject this nominee who will surely codify the racist, sexist policies of the Trump administration.”

The constitutional right to access safe, legal abortion is already at risk in this country, and confirming Brett Kavanaugh to the Supreme Court would tip it over the edge. There are currently 13 abortion cases that are one step away from the Supreme Court. If confirmed, Kavanaugh would likely have the chance to rule on one of these pivotal abortion cases within his first year on the bench. Since 2011, politicians have passed more than 400 state abortion restrictions that shame, pressure, and punish women who decide to have an abortion. People in these states are already traveling hundreds of miles, crossing state lines, and waiting weeks to get an abortion, and that is if they can access services at all.

For many women, these barriers effectively ban abortion, and women of color — who already face significant barriers to health care and attacks on their bodily autonomy — bear the brunt of it. Black, Hispanic, and Native American women experience poverty at more than twice the rate of non-Hispanic White women, and many lack the financial resources or job flexibility to make these trips. The cost of transportation, childcare, and time off work necessary to obtain an abortion all put access out-of-reach. This is hardest on people who already face barriers to accessing health care, including people of color, undocumented people, young people, people with disabilities, women, LGBTQ people, people living in rural areas, and people with low incomes.

Brett Kavanaugh’s judicial record, speeches, Senate Judiciary Committee testimony, and even his emails all lead to the conclusion that he would overturn Roe v. Wade and undermine access to safe, legal abortion if given the chance. Kavanagh was even nominated by Trump with the promise of overturning Roe v. Wade, and he has already ruled against a woman’s constitutional right to abortion. His nomination is not in touch with the American people, who consistently rule in favor of abortion access. In fact, a July poll found that support for Roe v. Wade is at its highest since the landmark case was first ruled on in the ‘70s. This helps explain why, even before the allegations of sexual assault came to light, Kavanaugh is the most unpopular Supreme Court nominee in decades.