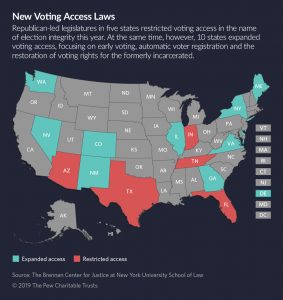 As 2020 approaches, it’s becoming clearer that the race for the presidency is going to come down to a few key states.

Changes in voting laws have become a critical issue nationwide, said Max Feldman, a counsel at the Brennan Center for Justice at New York University School of Law, which tracked voting legislation this session.

“There is a continuing push to restrict ballot access,” he said. “At the same time, there was real momentum and energy to pass sweeping new reforms expanding ballot access.”

With the presidential election beginning to heat up, this battle in the states over voting rights is only going to become more pronounced. States will have significant sway over who gets to vote in 2020, as Congress remains entangled in arguments over federal voting rights legislation.

This week, U.S. Senate Majority Leader Mitch McConnell, a Republican from Kentucky, defended his decision to block legislation passed by House Democrats that would have expanded voting access.

However, voting rights activists and Democratic lawmakers say those new laws will restrict the rights of an increasingly diverse electorate.It’s no coincidence, they say, that these cuts come as Democrats made substantial gains in Congress and statehouses following the 2018 midterms.

In fact, more states expanded ballot access than restricted it over the past legislative session.

The fight over ballot access was on dramatic display in Arizona.

Propped up by new Latino voters, Democrats won a U.S. Senate seat and four seats in the state House. But Republicans still control the governorship and the state legislature, which passed stricter voting laws this year.

“This stuff is basic, commonsense cleanups and improvements,” she said.

Cuts to early and absentee voting also passed in the Republican-led legislatures of Indiana and Texas.

One of Ugenti-Rita’s failed bills would have purged Arizonans who did not vote in two consecutive elections from the list of voters who automatically receive mail-in ballots. The measure would have stopped the distribution of those ballots to at least 200,000 voters. She said it was good practice to keep these lists up to date.

While the bill passed the state Senate, it died in the House.

Another failed bill in Arizona took aim at mass voter-registration drives, proposing to criminally penalize canvassers who intentionally or knowingly turn in registration forms after the deadline. A similar piece of legislation became law this session in Tennessee, restricting voter registration drives among paid canvassers in an effort to prevent false registrations.

Arizona Democratic Minority House Whip Athena Salman said these efforts, while incremental and masked as good government measures, are part of a Republican strategy to chip away at ballot access for people of color, students and other growing populations that tend to vote Democratic.

“Whether or not Republicans want to admit their intent is to suppress voter turnout, especially among communities that are more vulnerable, the indisputable fact is that it affects those communities,” Salman said. “What the Republicans are doing is threatening the very foundations of democracy.”

“They throw out these words like ‘voter suppression’ or ‘disenfranchisement,’ and I will not give quarter to it,” she said. “They’re just using this as a fake drumbeat to stir up their base because they’re not interested in solving election-related problems. They’re desperate.”

Arizona was one of the nine states that once had to seek U.S. Department of Justice approval before changing election procedures. That changed when the U.S. Supreme Court took out key provisions of the Voting Rights Act in 2013.

“I think there’s reasonable concern, without speculating about the motives of legislators, that there is significant correlation between race, demographic change and voting restrictions,” said Feldman, of the Brennan Center. “But at the same time, characterizing voting restrictions the same is overly broad.”

Such was the case in Florida, where voters in November approved a ballot measure to give voting rights to people with felony records, which would have affected as many as 1.4 million residents.

The Republican-led legislature in March passed a bill saying felons must pay certain fines and fees to regain their voting rights. This likely will disproportionately affect black and lower-income voters, who make up a disproportionate percentage of felons.

Republicans said their bill was meant to clarify the ballot initiative’s implementation. As Republican state Sen. Jeff Brandes said during a May debate, “We are doing our constitutional obligation to define those undefined terms in the amendment.”

That explanation doesn’t hold up, said Patricia Brigham, president of the League of Women Voters of Florida, an organization that attempts to get people to the polls through a progressive-leaning voter guide and registration drives.

“What kind of message does that send our voters?” she asked. “It doesn’t send the message of fair democracy, that’s for sure. It’s a very cynical and disrespectful attitude toward voters.”

Her organization, along with the American Civil Liberties Union of Florida, the NAACP Legal Defense and Educational Fund and the Brennan Center, sued the state in federal court over the new state law.

Ahead of the 2020 presidential election, Brigham expects the next legislative session to include more attempts to limit voter access.

After widespread success during the 2018 midterm elections, Democrats who gained power prioritized ballot access. In every state that gained a trifecta — in which Democrats now control both legislative chambers and the governorship — lawmakers passed laws expanding voting rights.

New York Democrats, who gained a majority in the state Senate for the first time in a decade, were able to pass a wide array of new voting measures, including implementation of early voting, pre-registration for 16- and 17-year-olds and better voting access for military servicemembers.

Empire State lawmakers also passed constitutional amendments that would allow for same-day voter registration and voting absentee without having to provide a reason. Because of constitutional procedure, the legislature must now pass those measures a second time before they can head to voters for ratification.

The bill passed the House in March. McConnell, though, never took up the legislation in the Senate, saying the bill’s aim was to benefit the Democratic Party and take power away from states.

Some states are turning to the courts to effect change. In Georgia, a federal judge is allowing a lawsuit targeting the state’s entire election system to go forward.

As the state continues its fight in court, the Republican-backed legislature in February authorized the purchase of $150 million in new voting machines. It also passed legislation that, to address some of the problems, weakens the state’s exact-match law for absentee ballots, limits the time period in which polling places can be closed before Election Day and curtails voter registration purges.

Stateline, an initiative of The Pew Charitable Trusts, provides daily reporting and analysis on trends in state policy.  Stateline content is published daily at pewtrusts.org/stateline.