NEVADA CITY, Calif. February 6, 2019 – Sunday, February 10th, was to mark the tenth annual Jim Rogers Memorial Ride/Run, at the Tour of Nevada City Bicycle Shop at 457 Sacramento St. in Nevada City. Runners and walkers were invited to join us this year! The ride has been canceled due to the forecasted winter storm – but the message remains “Save Lives – Drive Safely – Remember Jim Rogers.” 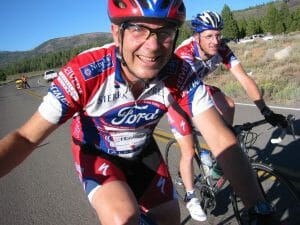 Jim Rogers was killed on January 31, 2010. (Jim is on the left) He was riding his bicycle on Highway 174 when he was struck from behind and killed by a distracted driver as he was ascending the climb out of Bear River Canyon. He was in her line of vision for over 6 seconds, but she never saw him because she was distracted, allegedly using her cell phone.

The event is held every year in an effort to bring attention to the dangers of distracted driving.  We have hundreds of our “Jim Rogers stickers” available that were designed to place on cell phones, dashboards, etc., to remind folks to “Save Lives – Drive Safely – Remember Jim Rogers”.   We encourage folks to place them on their dashboard and/or steering wheel as a reminder BEFORE they reach for their phone. Put them anywhere other folks will ask “what is the sticker for?” AND EDUCATE your friends and family! And REMEMBER, even “hands-free” on your phone while driving is still distracted driving.

Jim Rogers, along with his cycling buddy Ron Miller, created Tour of Nevada City Bike Shop in Nevada City when they were only teenagers. Jim was an avid cyclist and rode throughout Nevada County since the early 1970’s.