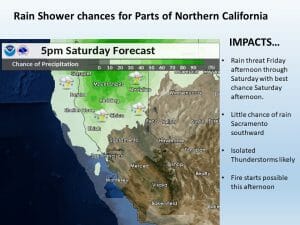 August 9, 2019 – Chance of showers and thunderstorms over the Coastal and Shasta mountains/foothills, and possibly over the Northern Sacramento Valley this afternoon and Saturday.

Dry through the remainder of the extended period. Continued cooling trend today and Saturday with daytime temperatures well below normal. Warming to near normal early and through next week.

Abundant high and mid level cloud cover over northern California this morning ahead of an offshore low pressure system now centered near 41N 132W. Southwest flow aloft should keep monsoon moisture well east of the region so remainder of the morning should stay shower free across the CWA.

Models in good agreement in pushing a weak frontal band on to the coast this afternoon bringing a chance of showers to the coast range. Instability progs showing significant cape in this region this afternoon so thunderstorms a definite possibility as well. For the remainder of the forecast area, cooling airmass, cloud cover and onshore flow will bring cooling to most areas resulting in daytime highs a few to 10 or more degrees below normal.

The upper low center pushes in to the northwest corner of the state over night pushing shower/thunderstorm chances across the northern portion of the forecast area. The highest chances of precipitation most areas will be on Saturday as the low center tracks slowly across the north state.

Stability progs indicate best threat of showers or thunderstorms will be north of a line from about Lake county to Oroville to Quincy. Precipitable water proggs show values near 1 inch over the northern Sacramento valley so any thunderstorms should contain as least some rainfall. 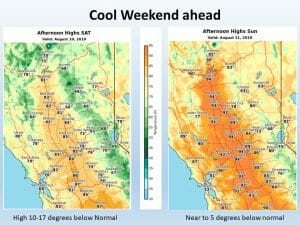 Cloud cover and airmass cooling will bring daytime highs even lower with highs in some areas approaching up to 20 degrees below normal Saturday afternoon. Upper low opens and shifts northeast of the state Saturday night so any thunderstorm or shower threat should end by Sunday morning.

Upper ridge slides over the state on Sunday bringing clearing and a significant warm up with daytime highs Sunday bumping quickly back up to near normal. Airmass warms more on Monday with highs forecast near to a little above normal.

Another cooling trend will be seen Tuesday through Friday as a pattern change is forecast mid next week. Tuesday begins with relatively zonal upper level flow contributing to another day of hot Valley temperatures in the upper 90s.

Troughing begins to amplify over the PacNW Wednesday, with ensemble guidance bringing this feature over northern California by late week. High temperatures will continue to decrease late week with temperatures Thursday/Friday slightly below average for mid-August.

There may be the potential for some storms in far northern California late week as this trough moves onshore, but for now have kept the forecast dry as details continue to be worked out.