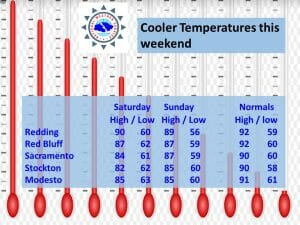 September 6, 2019 – A slight chance of showers Shasta county mountains next Tuesday afternoon and evening, otherwise dry through next week. A little warmer than normal today then below normal temperatures over the weekend through mid week. Warmer than normal again by the end of next week.

A departing upper trough over the Pacific Northwest will allow high pressure to build temporarily over the north state today ending the isolated shower and thunderstorm threat that we have seen over the last couple of days.

Daytime highs today should come in similar or just a bit lower than Thursday but still a few degrees above normal for late summer. Daytime temperatures will see a bigger drop over the weekend as a Pacific weather system passes through to the north.

Daytime highs Saturday and Sunday are expected to come in a few to several degrees below normal. Parts of the weekend will see a fair amount of cloud cover as this system moves through especially Saturday but, at this time, precipitation is expected to remain north of the forecast area.

Daytime highs Monday are forecast to run anywhere from a few to as much as 10 degrees below normal. As with the previous system, precipitation is expected to remain north of the forecast area.

Mean trough forecast along the West Coast next week with temperatures below average. Pattern expected to be dry except for low precipitation chances near the Oregon border. Ridging rebuilds late in the period with temperatures returning to near normal.