August 5, 2019 – Above average temperatures early this week with a gradual cooling trend to below normal by mid-week. Dry weather continues. 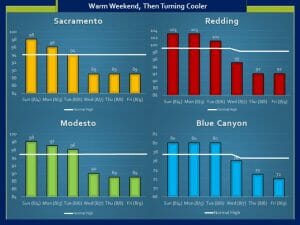 Clear skies except for a few high clouds arcing northward from off the central California coast. Current temperatures are similar to 24 hours ago and generally range from the 40s in the mountain valleys to the 60s to lower 70s elsewhere.

Little change is expected across the region today and Tuesday with highs remaining slightly above average for early August. The marine layer remains shallow (less than 1k ft deep) and onshore gradients light to moderate. Some mid and upper level moisture will spread northward early this week resulting in partly cloudy skies at times, but the risk of thunderstorms is expected to remain to the north and east of the forecast area.

A little bit cooler weather is forecast for Wednesday and Thursday as the eastern Pacific trough edges closer bringing a combination of increased onshore flow along with some synoptic cooling.

A cool upper low centered off the Oregon coast Friday will move inland on Saturday. This will result in below normal temperatures due to synoptic cooling and increased onshore flow. Dry weather is still expected over the forecast area as low progresses inland. The NBM continues to show convection is expected to remain just north of the area over the Trinity Alps but will have to watch over coming days to see if this potential could shift into northwestern Shasta County.

Temperatures will remain seasonably cool through Saturday. Upper ridging then rebuilds into the area Sunday into Monday. This should bring near normal temperatures for Sunday and then temperatures warming to several degrees above normal on Monday.